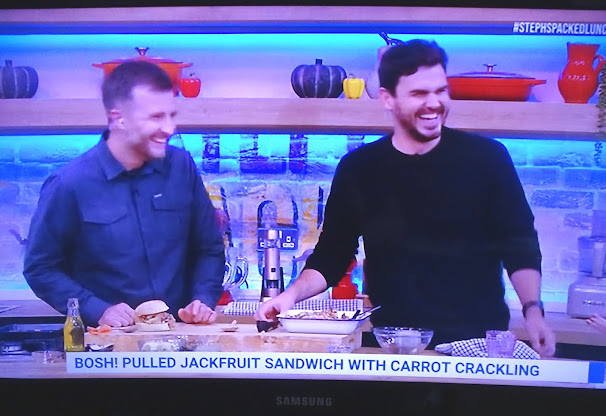 Our Ian was on television again today. He and Henry were doing a cooking slot within the Channel 4 chat show - "Steph's Packed Lunch". It is the third time they have been on there.

Each time the pressure has been on to talk to the hostess - Steph McGovern while simultaneously demonstrating the preparation of a vegan dish. In my opinion they're not given quite enough time. Another minute would be a huge help, making the process less frenetic.

Today they were making pulled pork sandwiches with apple sauce and carrot crackling. Of course it's not really pork but roasted and shredded jackfruit which when suitably seasoned can take on the flavour and texture of pork. It seemed to go down a treat with Steph and her other studio guests.

By the way, the show is filmed in Leeds so Ian and Henry had to travel up from London early this morning. I have lost count of the number of times they have been on television now. With each TV experience they seem more relaxed and confident in front of the camera.

Ian knew nothing of this particular job when we saw him last weekend. This coming weekend he is off to Dubai on an all expenses paid trip - partly to promote vegan cuisine and also to play a small part in encouraging holidays to Dubai. Incidentally, I have been there twelve times but never left the airport! 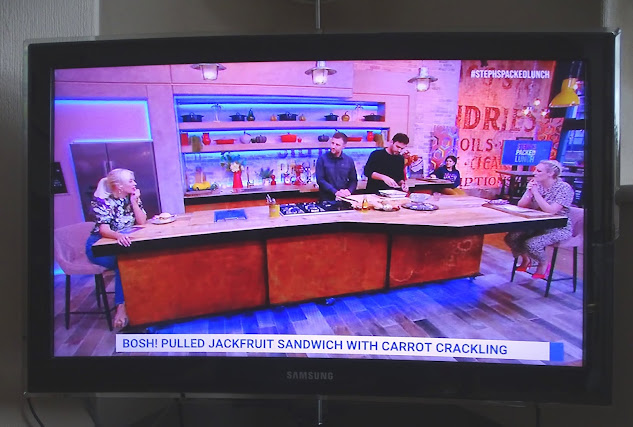