Every Sunday I go to the quiz at our local pub. There's a prize kitty. It sits in a safe and to win it you have to guess the code. There are two hundred numbers to pick from and each week the kitty builds up. Tonight, I had a winning line on my Bingo-like quiz sheet, 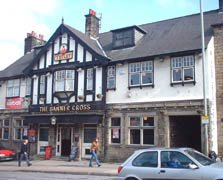 so I went up to the bar fully intending to opt for the £10 winner's prize and forfeiting my chance to go for the safe. But the quizmaster - Leeds Mick - was persuasive and reluctantly I chose to try the safe. On the sheet, there were all these crossed out numbers staring back at me, but the number 136 was sitting on its own. I went for it. Leeds Mick tapped in the numbers and lo and behold - I won! How much? Two hundred quid - that's all! Two hundred f-ing notes! Yo! But as I always sit with Roy and Mike, I had to split it three ways and then there was ten quid for Neil and Dave's table to get some drinks and ten for Richard, Stan and Gibby - leaving me with £60 to bring home. Holy Mother of God! Such moments are rare. It almost made up for seeing Hull City unluckily lose their third home match of the season against a dull Coventry team, 1-0. This sixty quid will come in very handy when I jet off to Berlin on Tuesday - I might keep it to spend on a brilliant German meal of sausages and sauerkraut with black bread and a stein of Munchen beer. Some people are losers but tonight, I'm a winner! Autographs later! TWO HUNDRED! Yaaaaay!
- August 27, 2006