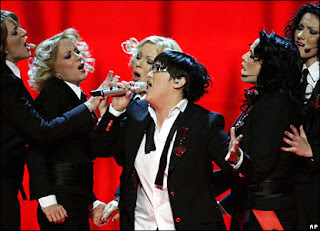 Of course, I shouldn't care one jot about the stupid Eurovision song contest which came this year from Helsinki, Finland. But in spite of myself I do. The songs were - as usual - almost universally trite and instantly forgettable. Eurovision seems to have developed a song style all of its own which is totally out of synch with any current musical fashions.

Great Britain's entry was absolutely awful. A bunch of has-beens called Scooch performed their ridiculous jokey but slightly jingoistic number "Flying the Flag". It was embarrassing and didn't deserve many marks at all but it was , amazingly, somewhat better than half the other entries.
It was the voting that really riled me. It was clearer than ever that in most countries people weren't voting for songs but for old alliances and international bonds based on ethnicity, religion or geographical proximity. Hence it was no surprise that Cyprus gave its twelve point reward to Greece or that Sweden gave its twelve points to Finland. As Shirley and I watched the scoring unfold I was nearly always correctly predicting where each country's highest points would end up. Western Europe did very badly indeed and the top places were dominated by former Russian-aligned countries including Moldova, Bulgaria, Belarus, Ukraine.
The winner was Serbia's Marija Serifovic (See picture top right) with her rendition of "Moltiva" - and what a load of bollocks this song was. The upshot is that the Eurovision circus must descend on Belgrade next May and in my view not enough healing time has occurred since the Serbian atrocities of the Bosnian war and the troubles in Kosovo. Serbia doesn't deserve an historical seal of approval courtesy of the Eurovision media bandwagon - not yet anyway.
If you visit the Rock and Roll Hall of Fame in Cleveland, Ohio you will see and hear how incredibly influential the United Kingdom has been in the world of popular music since 1960. However, in Eurovision we persist in putting forward useless acts like Scooch (see picture bottom left) singing meaningless songs. What I'd like to see is a genuine British songsmith up there representing our country, singing a song that has guts and lyrical integrity with a tune that resonates through your head, sung in a way that says 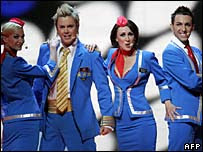 - "I don't give a damn about the biased Eurovision voting. This is a real song. Take it or leave it." James Morrison, Elton John, Amy Winehouse, Lily Allen, Joss Stone, Keane, Travis, The Manic Street Preachers... we have so many talented people to choose from.
- May 13, 2007