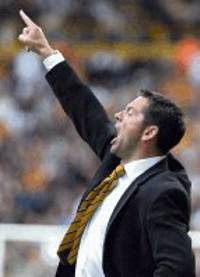 LEFT: City manager Phil Brown spots a seagull during today's disappointing home game with Plymouth.
The last game of the season. Plymouth Argyle at one o' clock on a Sunday lunchtime. There were me and Shirley and our Ian and my friend Tony and his wife Fiona and 20,000 other Hull City fans and around three hundred bravehearts from Plymouth. When did they set off? Must have been five in the morning.
It was a damp squib of a match. Neither team had anything to play for. Our goalkeeper Boaz Myhill brilliantly saved a first half penalty but then they scored anyway just before half time. In the second half we realised that the ugly and balding linesman on our side of the pitch must have been born and bred in Plymouth and was clearly a lifelong supporter of the Argyle because his flag kept going up when Tigers forwards were clearly onside and bearing down on goal. Although Stuart Elliott hammered home a deserved consolation goal for City, we lost 2-1.
On three or four occasions during the match the chant went up from both Hull and Plymouth fans - "We all hate Leeds! We all hate Leeds! Scum! We all hate Leeds! We all hate Leeds!" Rather poetic don't you think - especially in the light of their blatant and cyncal abuse of Football Association rules in order to ensure they are not docked points next season. They were already down for Chrissake so why dock ten points just now? Typical of Leeds! Bad losers and cheats!
So that was the end of the 2006-2007 season. We survived! I saw some great games and some awful ones too. It is clear as crystal that we have to change our squad and bring in two or three significant players who can make a difference if we are to hold our own next season and move away from the relegation lottery zone. Apologies to any readers who are not remotely interested in English football and the struggles of Hull City AFC. I feel exactly the same way about astro physics and Orkney island knitting patterns!
- May 06, 2007