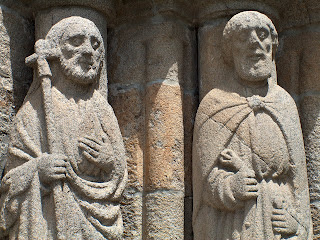 Detail of stone carving on the entrance to the church in Noia
So we went, not like the medieval pilgrims who tramped footsore across Europe, mile after mile to get to Christianity's third most holy city - the alleged resting place of the apostle St James - Santiago in Spanish. Instead we flew for an hour and forty minutes from Liverpool. I noticed something about the huge cathedral - how algae and moss and small green plants had established themselves on its high stone pinnacles and windows - rather like a sea cliff. I liked that - the sense of nature threatening to reclaim it. 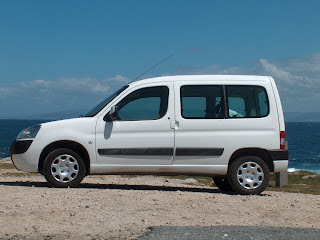 Our "cool" Peugeot Mover ice cream hire van.
After Santiago de Compostela, we drove to the coast near Riveira. There we stayed in a four star hotel overlooking the bay. How lovely it was to wake up to the sunshine of Sunday morning and see fishermen hauling in lobster pots or casting their lines from small rowing boats. Further round the coast, in our rented white Peugeot Mover, we walked on a wild Atlantic beach untouched by development - just wooden walkways weaving through the dune vegetation to rocky outcrops where broken shells and driftwood had gathered in heaps - as if purposefully installed by modern artists. 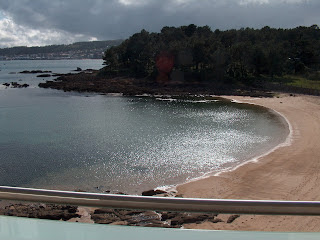 View from our coastal hotel room.

I fell asleep on the lonesome beach near our hotel, my mind drifting to forgotten memories and speculations, all swirling together with images from Will Self's 480 page "Book of Dave" - now finished. Don't you just love that sunny summery feeling - like beach fever - time suspended - your mind wandering in a relaxed haze? I wanted more afternoons like that but to have just one was quite lovely.
On the plane on the way home, we met a man of seventy who had walked the Camina Frances - six hundred miles. He began on May 2nd - walking over twenty miles a day to get to Santiago. He talked all of the hour and forty minutes home but you know - we didn't mind. He wasn't boasting - just telling the fragmented human story of his incredible journey along such a well-trodden path.
We only tasted Galicia. There was so much more to take in. Three days is nothing.
- May 29, 2007