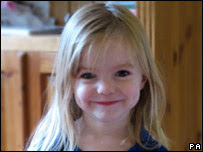 Poor little Madeleine McCann should have been with her family celebrating her fourth birthday on Saturday. If you don't know - this little British girl was abducted from a holiday complex in southern Portugal some ten days ago while her parents apparently ate tapas in a restaurant about fifty yards away.
It may be politically incorrect to say it but I have been appalled by some of the hype that has surrounded the child's disappearance with "The Sun" newspaper pumping up the hysteria. At Saturday's Glasgow Celtic home match, hundreds of "Find Maddy" posters were distributed and the players all wore yellow wristbands. Why? Glasgow is a long way from The Algarve. And then David Beckham made a TV appeal and bigwigs like Richard Branson and J.K.Rowling set up a £2.5 million reward fund. It wasn't like this when little working class Ben Needham from Sheffield disappeared from the island of Kos fifteen years ago. It took a good while for the media to show much interest at all outside of his home city.
Ben is still missing. However, I hope with all my heart that wee Madeleine is found safe and well - though as the days drag on that hope is in danger of shrinking. There are too many bad, mad, greedy people in this world. Right thinking people across the globe will want Maddy back home with her family but hey, at the risk of sounding unfeeling, let's not go crazy about it! See below:- 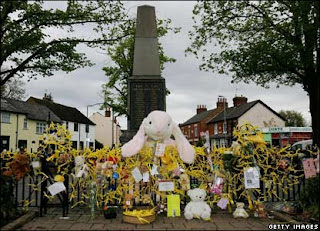