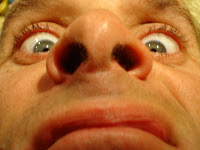 Over the years, I have observed an odd and I think rather primitive phenomenon in the field of human interaction - namely sniffing. It is mainly, though not wholly connected with men. Let me illustrate. You're in a supermarket with a trolley and a guy with his own trolley passes you near the frozen vegetables section. As he passes, he inhales deeply through his nostrils making a familiar sniffing sound. Or you're on the bus and you look at a guy as he gets on at the next stop. As he passes you, he sniffs noticably. It happens everywhere there are strangers. My theory is that it harks back to territorial and mating claims of pre-history. Every other male is a challenge to your dominance and the sharp sniff is a way of saying - I'm the boss in this situation - my sniff subjugates you.
I think I am liberated enough to be beyond this instinctive game of oneupmanship so whenever I hear a sniff, I immediately sniff back. It has got me some very funny looks. I have never seen any academic writing about this habit but I swear it does exist. To all you men out there, I urge you to listen out to the sniffers - though it is very possible that you yourself have been signalling your status through sniffing for years without ever noticing you were doing it!
- February 17, 2008