I was walking up the cobbled street that leads to Stirling Castle. It was noontime after a party in Edinburgh and I was with a young woman I had met there. I can't even remember her name. It was in the late spring of 1975 or 76.
We had our arms round each other and the sun was warm. Perhaps we both thought that this might be the start of something. I remember that her skin was milk-white. We walked up that cobbled hill where kings and kilted soldiers had walked. A figure came towards us on the pavement. An old woman with a shuffling gait and a black shawl over the back of her head and shoulders.
I edged my brand new partner to the kerb to allow the old woman to pass but as she came level with us, she grabbed my sleeve. I stopped. The old woman with bleary blue eyes looked into mine and said very deliberately, "You will be very lucky". Then she let go of my arm and went on her way down the hill. The Edinburgh girl and I paused for a moment as a car passed by.
It was at this precise moment that I noticed something rolling down the pavement towards me. Where it came from I have no idea. I watched it coming closer then I stopped it with my foot, picked it up to examine it. The girl said, "What is it?" but I couldn't say.
It was made of wood with a turned base in the shape of a large wine glass and with a wooden spout but that description might depend on how you looked at it for on the turned section there was a primitive carving of a man and a woman in historical garb holding hands in a rural setting.
I pocketed the object then guided my pretty guest around Stirling Castle, looking east to the Wallace Monument and south to the site of the Battle of Bannockburn.
In later years, I used the object to hold incense sticks and for a while tried to find out what it was. I wondered if it had come from an old piano but never confirmed that. To this day it remains as mysterious as how it came to be rolling down that hill and I continue to connect it with the strange old woman who grabbed my arm moments before. Do you know what it is or would it be better to continue to treasure such a delicious mystery? 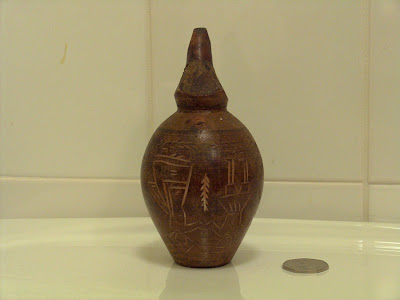 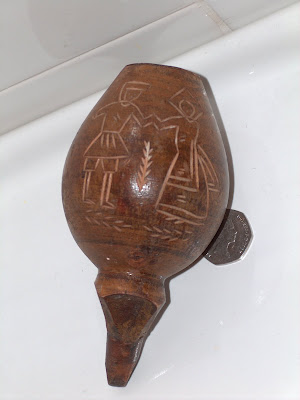