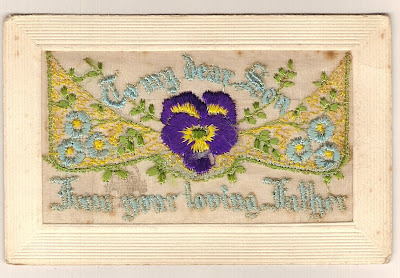 Historically, my family is unremarkable. There were no famous writers, politicians, axe murderers, explorers, inventors - just ordinary people raising families, trying to be happy, growing up, working and finally dying. The backbone of England.
In late 1914, my grandfather, who was called Philip like my father, went off to war just a few months after his baby son had come into the world. I have no idea what this young man saw, heard, smelt or felt during his war years in France but thankfully he was one of those who survived the horror of it all. Funny how people forget that from the carnage of those famous killing fields more men came home than were left behind. He's the standing soldier below. 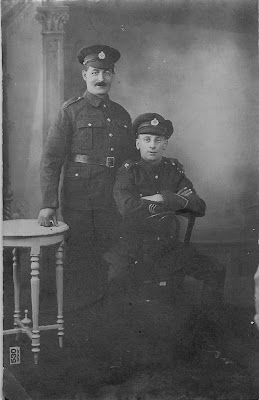 Sweetly, on August 1st 1915, my grandfather sent his baby son a first birthday message. The front is typically embroidered - by hand or machine - I cannot say - but I guess that many fathers bought similar cards to send home when kicking their heels away from The Front. On the reverse it says: "For little Philip wishing him many Happy Returns of his Birthday with Love and Kisses from his Daddy August 1st for the 5th France".
I never met my grandfather. He had gone before I was born after working for many years as a milkman in and around Malton, in the very heart of Yorkshire, where I guess he enjoyed many Yorkshire puddings in the bosom of his family - sometimes remembering the hellishness he had witnessed in France. 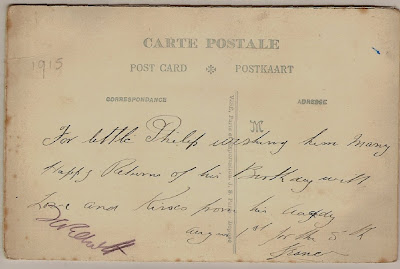