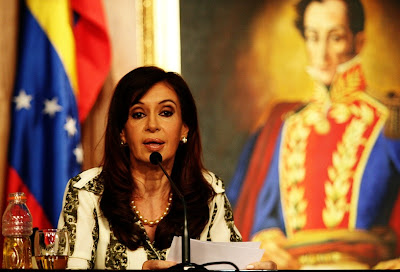 Not Evita, Cristina. Cristina Fernandez de Kirchner, aged fifty seven, the recently widowed President of Argentina. Her husband Nestor whom she met at university, where they both studied law, also served as Argentina's president. He died a week ago. Like the Perons, Cristina and Nestor formed a political dynasty embellished with fashion, wealth, rumour and intrigue in true Latin American style.
Left of centre, the Kirchners are generally credited with stabilising the Argentine economy and achieving moderate social reforms. Cristina maintains her country's long-standing claim on The Falkland Islands - from where one angry islander referred to her as "Old Plastic Face". She has had to fend off plenty of somewhat sexist jibes about her appearance saying that when she was a little girl she loved to glamorise herself by plastering on cosmetics and will make no apology for always trying to look her best in public. "Just because I stand up for the poor, does that mean I should look poor?"

"It's the greatest sadness I've had in my life. It's the loss of the man who was my companion of thirty five years, the companion of my life, of struggles, of ideals... a part of me has gone with him."

That part was now in Rio Gallegos, she said, referring to Mr Kirchner's home town where he was laid to rest last Saturday.

She thanked all the Argentines who had sent support, who had prayed and who had cried, including those who turned out for his funeral. "I want to thank especially the thousands of young people there who sang in their grief, but then marched with joy, for him and for the country."

And this is the tender end comment that especially entranced me - "I want to tell them that, in their faces, I saw his face back when I met him." In the young who came to mourn Nestor's passing she saw idealism, energy, the hope for something better and lives still to be lived - the true spirit of modern Argentina which is itself still a very young country. It was his face she saw in the middle of the crowd and at the middle of her grief.

Perhaps one day they will make a musical about Mrs Fernandez de Kirchner and they'll call it simply "Cristina" with the lead actress requesting in song, "Don't Cry for Me!" How do you think it might go down?