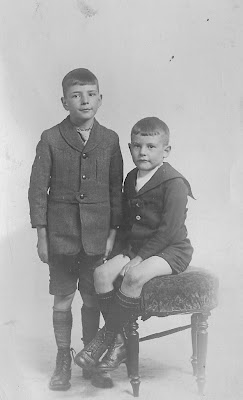 Dad with Uncle Jack (seated) circa 1924
My father's father ran a small dairy in Norton which is on the south bank of the River Derwent, opposite the market town of Malton in the heart of rural Yorkshire. There was a small stable on the property for milk deliveries were still made by horse and cart. Dad and his four siblings were all born in the little house adjacent to the dairy. The first-born was Tom whose exact parentage is uncertain. Next came Dad then Frank and Evelyn and finally, the youngest - Alec John who was always known as "Jack". My Uncle Jack born in 1917.
Dad showed some academic ability at primary school, gaining a scholarship to Malton Grammar at the age of eleven. Three years later Jack followed his example. At eighteen, Dad became the very first member of my known family to progress into tertiary education, enrolling at St John's College, York on a teacher training course. In 1935, Jack followed him to St John's, specialising in Art education. Both Dad and Jack represented St John's in rowing but whereas Dad was a decent rugby player and cricketer, Jack's other sporting forte was gymnastics.
When the second world war broke out, my father was quick to leave his teaching post to join the RAF and was soon posted to India where he specialised in meteorology and like thousands of other service personnel enjoyed a bullet-less war on the wondrous Indian sub-continent waiting for a Japanese invasion that never materialised. Uncle Jack also joined the RAF and was trained up to be a radio operator aboard a Bristol Blenheim Nightfighter.
On November 16th, 1940, after a long training flight in wintry weather the Blenheim fell from the sky - probably due to icing on the wings. It crashed on farmland at Ramsey Tyrells, near the village of Stock in Essex. The three young men on board - Messrs Winter and Romanis and my Uncle Jack were killed outright. Uncle Jack was just twenty three. His burnt body was retrieved and taken back to Malton for burial. The site of the tragic crash remained undisturbed until an amateur archaeological group unearthed it in the summer of 1975 (see below):- 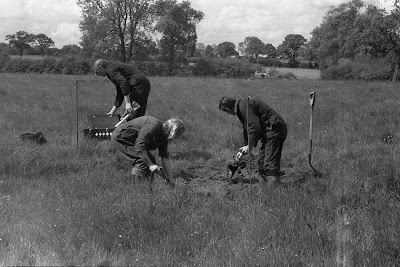 I'm posting this on the eve of Remembrance Sunday for two reasons. Firstly, it's in acknowledgement of a young man I never met whose life lay before him - a career, a lover or a wife, children, dreams fulfilled and others shelved, laughter and tears, the natural progress of a full lifetime. Secondly, I'm thinking of all those thousands of military personnel who have died away from the fighting but as a direct result of warfare - training exercises like Uncle Jack's, fatal road accidents perhaps simply getting to or leaving military bases, suicides, snagged parachutes, faulty weapons and so on. Deaths that may at one level seem pointless, almost ridiculous but are a rarely acknowledged feature of all wars. They also served and their deaths caused the same amount of hurt back home as that which greeted the deaths of battlefield heroes and medal winners.
- November 13, 2010