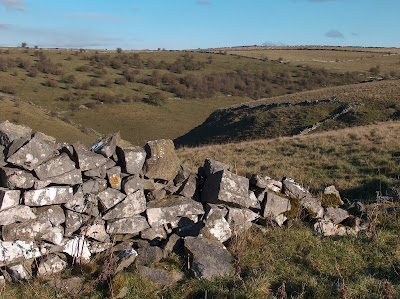 View over Coombs Dale
Just before the first snow of winter snook down in the dead of night, my friend Tony and I went rambling in nearby Derbyshire on a sharp November day. The sky was sky blue. The sun was sunny. In hollows and shaded dells, frost clung tenaciously to dry leaves that crunched like gravel as we made our way along less trodden rights of way.
After parking in the village of Calver, we soon entered Coombs Dale with its ancient mine workings which , because of Nature's attentions, now present interpretation puzzles even for archaeological genii. After a mile we climbed out of the dale and into the light, striding across Longstone Moor towards Longstone Edge where I snapped this:- 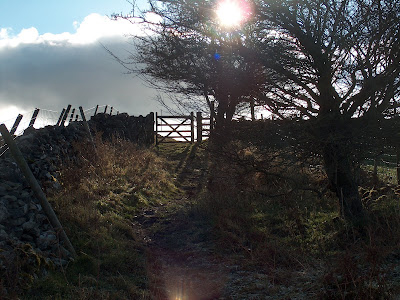 Descending from woods which disguise the edge's history of mineral extraction, we noticed the delightfully peaceful hamlet of Rowland which sits at the end of a one way track:- 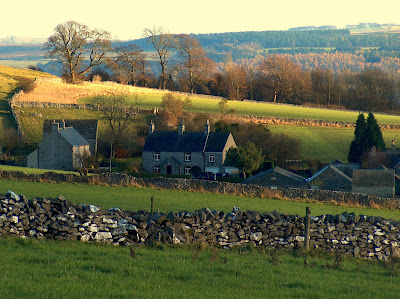 We observed comical "silkie" chickens in a garden looking as if they'd dressed in furs rather than feathers:- 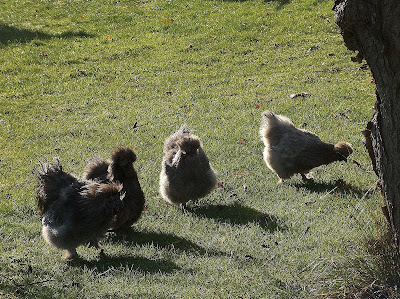 After lunch, drinks and more nattering at "The Eyre Arms" near Hassop Hall, we headed for Bank Wood and a long walk back to Calver. To the south east, we could just make out Chatsworth House, palatial home to the Dukes of Devonshire. To the north east we noticed the exposed millstone grit of Curbar Edge and to the west the beautifully horrendous and much debated scarring effects of Backdale limestone quarry:- 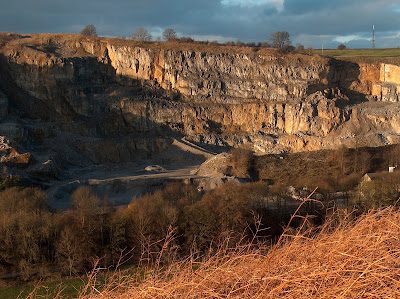 Driving homewards I parked near White Edge and the Longshaw estate to take this sunset snap:- 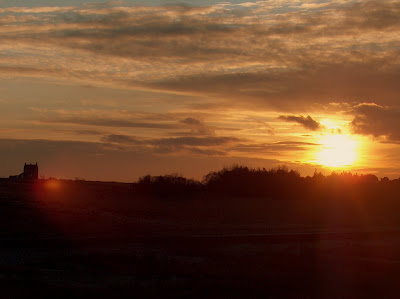 I've known Tony for donkey's years. With him, it's always as if we're just continuing with a conversation we began back in 1979 when we first met. Thankfully, he walks at my pace both literally and figuratively. It was as Wallace might have said - "a grand day out"... And then the snow came whispering down while my adopted city slept.
- November 27, 2010