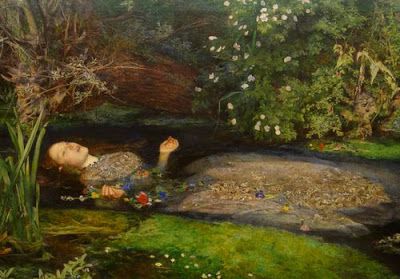 Sunday morning. How many years ago? Seventeen - eighteen - I can't quite remember. Ian is goalkeeping for his cub-scout team. We're in Millhouses Park. On my left is the main railway line south to Chesterfield, Derby, London - but before it, running almost parallel, partly hidden by bushes and overhanging trees, the River Sheaf winds its way to its confluence with the River Don.
The Sheaf hardly deserves the appellation "River" as it is normally nothing more than a shallow overspill drain from the moors. Only when there has been prolonged rain does it begin to resemble something more than a little stream.
"Cover! Cover!" yells the team manager. "Get on-side!". "What are you doing?!" "Pass!" "Make some space!" In a crowd, like seaweed fronds, the players move up the pitch and then back down. It's chilly but at least it isn't raining. The turf is spongy.
I need to urinate. I knew I should have gone before leaving home but we were late up and I had to sort out Ian's kit. Looking furtively left and right, I head for the bushes. Behind me, twenty five yards away, the referee's whistle shrills for another offside. Relief! An arc of piss hits the water. Simultaneously, I notice some clothing rubbish tangled in the branches and shadows of an overhanging willow. I look more closely, more closely. I don't want to believe it's true. It's someone, some body in the water. Not rubbish but face down.
I get down into the stream. The water is knee-deep but not dangerous. I wade over to this thing trapped by the willow. I tug it free, turn it over and momentarily forget to breathe. An ashen face with black eyes glinting from half-closed eyelids. The lower jaw sags. Dishevelled swimming pool hair. A cardigan still buttoned. Black like the buttons. A floral dress up around her waist like a curtain. But what I mainly notice is her colour and her coldness. Blotched and greying beef fat. I thought I might have saved her but she is well past saving. With hands under her armpits I haul her corpse to the bank and leave her half in, half out of the little river. She is not Millais's "Ophelia". She will not float away.
There's a man with a dog. He arrives just as I'm clambering back up. The ref's whistle blasts again. The dog man and I exchange a few words. He scurries off to get help. I tell some small boys to keep away. Before the paramedic arrives in his green and yellow livery, others have gathered from nowhere. There's a hold-up in the football match but it soon resumes. An ambulance comes. A police officer. He takes my name and contact details as I shiver. The final whistle sounds.
__________________________________
I forget her name. She was fifty nine and she took her own life, probably plunging from a bridge further up stream with the river still partly in flood, the night before I found her. They reckon she had only been in the water for ten hours or so. Of course I don't know the full story. She was a childless spinster with money worries and a history of mental anguish. Secreted in her underwear they found scribbled notes. I have often thought of her. That disturbing lifeless face. Those peeping eyes and naturally I have pondered upon her despair. To leave life like that. Someone's daughter with no more stomach for the battle ahead, no more hope of joy.
- November 06, 2010