"Hacktivists". That's a new word on me. I've been aware of hackers and self-interested purveyors of spam. I think of such people as the lowest of the low. Instead of riding with the thrilling internet wave, they've been actively trying to spoil our journey. But "hacktivists", well they're something different.
It's all to do with "WikiLeaks", founded by Australian whistleblower, Julian Assange. It seems very clear that the American government have been applying a range of behind-the-scenes pressures to discredit "WikiLeaks" and seriously hinder its functionality. The founder of "PayPal" even admitted that the reason he had severed links with "WikiLeaks" was because of arm-twisting overtures from Washington. It wasn't that he wanted to disconnect but realised that his company's well-being would be harmed if he did not comply.
Then "Mastercard" and "Visa" withdrew their services from "WikiLeaks". Remember that these are companies that happily service porn websites and sites that promote the use and sale of guns. The two card companies have previously shown no inkling of corporate morality. They have always been ruled by their hunger for profit.
Little did they appreciate that out here in the real world, skilled computer-savvy individuals were preparing to launch cyber-attacks on their own functionality by hacking into their websites and databases in protest at their clearly politically-inspired efforts to divorce themselves from "WikiLeaks". So such computer geeks are not just plain mischief-making "hackers" or political activists, they are a mixture of the two - "hacktivists" - using their technical expertise for political purposes.
It seems to me that truth is a healthy thing and that "WikiLeaks" has been on a mission to reveal truths of which the rest of us were unaware. Some of these truths are uncomfortable or embarrassing - especially for the government of the United States but truth is something precious. The world needs more truth, not less.
I don't know what happened in Sweden with regard to the sex charges against Mr Assange. Apparently, one of the the women concerned is saying that Assange did not wear the condom she'd requested before they had consensual sex. Is that rape? And why did that London judge deny Assange bail when he had voluntarily presented himself at a police station and why did the Swedish authorities fail to present any significant evidence for their assault claims?
The whole thing stinks. If I had the technical know-how to engage in "hacktivism", I would happily be targeting "PayPal" and "VIsa" right now. It's something new. Hitting where it hurts. Not with swords or grenades, machine guns or IED's but with some clever computer codes and the simple click of a mouse. We don't need to run to the barricades any more, we can just sip cups of tea as we press buttons on our laptops. 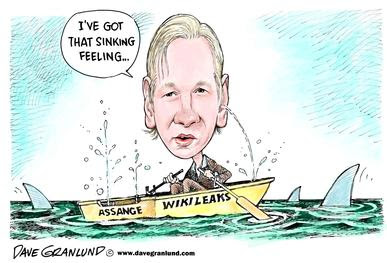