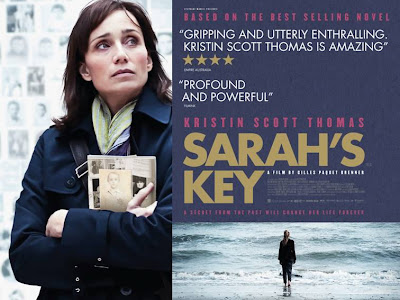 Last week, following a strong recommendation from Oldham Mike, I went to The Showroom cinema near our city's main railway station to see "Sarah's Key" based on the novel of the same name by Tatiana De Rosnay and directed by Gilles Paquet-Brenner. I was not disappointed. Starring Kristin Scott-Thomas as an investigative magazine reporter, the film explores what is for France a veiled and embarrassing episode in the history of World War Two.

In the summer of 1942, under the instructions of the Nazis, Parisian police herded up over thirteen thousand members of the Jewish faith and held them in disgustingly inhumane conditions in an old velodrome until arrangements could be made to ship them away to death camps. One of those Jews was a little girl called Sarah who, sensing the danger at her family's door, instinctively locked her little brother in a secret wardrobe to keep him safe and took away the key.

I loved the way the film moved frequently from the desperation of wartime to the present day and the magazine reporter's pursuit of the truth. There was an interesting mingling of lives - as if somehow what happened in the past had infected the present with repercussions still hovering around like a fusty aroma.

It was a tender film containing a range of human emotions - from fear to selflessness and from joy to utter disbelief. At one level you are confronted with the horror of what human beings are still capable of doing in wartime and at another level you recognise the essential goodness to be found in people - in Sarah, the farming family who adopted her and in Scott-Thomas's character - Julia Jamond.

This was a film with depth. It held my attention throughout as a good film should. There were about thirty people in the screening I attended and unusually, everybody stayed in their seats until the credits were over. "Sarah's Key" - I recommend it wholeheartedly. And thanks to Oldham Mike for pointing me towards it.
- August 22, 2011