A number of people have become very rich via the internet and usually on the backs of very simple ideas. I think of e-bay, Friends Reunited, Trip Advisor, Bebo and Facebook to name but a few. Perhaps, like me, you have sometimes wondered what the next lucrative internet phenomenon might be and could I/you conceive the core idea. A spark to light a fire. Well wonder no more, for I have seen the light. It struck me as I was weaving home from the pub the other night. The antithesis of Facebook. Yes that's it. Assbook... Bumbook... Arsebook and finally I came up with:-

Millions of hours have been wasted around the planet - mostly by younger generations - amending and checking out their Facebook pages and social connections. Facebookphilia is all around us - not just on laptops and home computers but on smart phones too. In offices, universities, internet cafes, schools, libraries and factories the Facebook legions keep checking and changing their pages like obsessive lunatics.

Buttbook will be different from that. To begin with, there'll be no faces - just butts. Visitors will be restricted to no more than ten minutes a day on the site. Anyone found using the term "lol" will be immediately barred but with regard to misuse of capital letters in written posts, the principle "three strikes and you're out" will be applied. Comments must be entirely truthful and credits will be earned by those judged to be champions at kicking butts - not literally but metaphorically. There will be separate sections for kicking the butts of banks, the wrongdoing of public servants, insurance companies, supermarkets, celebrities with inflated egos and media moguls.

Idle Facebook-like chitter chatter will be deleted immediately by highly intelligent and good-looking moderators. Any photographs uploaded must not include pictures taken at parties, in pubs or at nightclubs or any photos of Lancashire or the Costa Brava. In Buttbook's business plan we expect to earn an estimated $250,000 by Christmas and as the phenomenon gathers pace, profits from advertising are expected to double and redouble with each passing quarter. We shall only advertise "uncool" products like "Izal" toilet paper, "Woodbine" cigarettes, "Vosene" shampoo, The Liberal Democrats and balsa wood - giving Buttbook a distinctive "retro" appeal.

You've got to move with the times and Buttbook is surely the next "big thing". If you would like to apply to become a Buttbook moderator or want to invest your life savings in Buttbook, please feel free to summarise your credentials in the "comments" section after this post. Eat your heart out Zuckerberg! 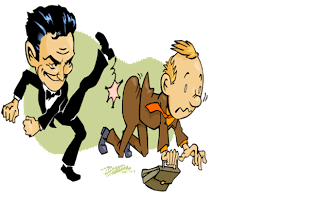