The Laughing Horse Blog Awards committee have been meeting at a secret country hotel location this Christmastide to thrash out differing views on who should receive the coveted Blogger of the Year Award for 2011. Of course, last year the proud winner was chicken farmer Earl John Gray of Royal Trelawnyd in North Wales. He continues to produce a very human and honest blog that is amusingly self deprecating as it recounts the ups and downs of his life which is shared with an array of creatures as well as his mysterious minder/partner - Chris. However, committee member and bird lover Bill Oddie objected to Earl Gray's vicious hatred of starlings and effectively vetoed his nomination this year.

The committee yawned through dozens of those dull speciality blogs on mixed crafts, cookery and flower arranging. They also rejected the dozens of wholesome but boastful "family" blogs that have been spawned in the heartlands of America. Bible-bashing blogs were quickly discarded along with blatantly commercial blogs.The committee noted that in 2011, several previously noteworthy blogs ground to a halt with creators perhaps running out of ideas or simply becoming disenchanted with the very process of blogging. Their loss.

Below you can admire this year's designer widget (thank you Jasper Conran!) The committee wishes to stress that only the 2011 Gold, Silver and Bronze medal winners are entitled to display this exclusive award design in their blogs - either in the sidebar or simply in a new post:- 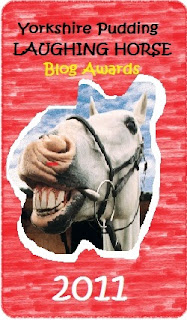 Honourable mentions included Libby, Mountain Thyme, Jenny for "Demob Happy Teacher", Jan for "Cosumne Gal", Katherine for "The Last Visible Dog" and of course Senator R. Brague  from Canton, Georgia, USA for the famous "Rhymes With Plague" blog that has been the subject of much scrutiny by the C.I.A. since President Obama was inaugurated.

In third place (Bronze medal winner) the committee have selected Helen of "Helsie's Happenings" (Brisbane, Australia). Her blog is generally cheerful and homely containing numerous original photographs that show off Australia in an engagingly personal manner. Her interest and increasing proficiency in quilting is documented within the blog without ever threatening to take over. She remains unashamedly enthusiastic about blogging and how her blog links with the rest of the world.

In second place (Silver medal winner) the committee opted for Daphne of "My Dad's a Communist" (Leeds, England). Daphne is a previous winner of The Laughing Horse Blogger of the Year Award and though her posts her becoming a little less frequent than before, she continues to write in an engagingly humane style - observing some of the small intricacies and irritations in  life that are rarely articulated. Always worth reading.

In first place (Gold medal winner), the committee were happy to recognise the work of a blogger who like the prodigal son was lost but is found again. His blog contains regular features and is often well-illustrated with the creator's own pictures. His memories of his trip to South Africa have all been worth reading about and recently he has been poking fun at the great Yorkshire nation through his original and fantastical tales of life in mythical Cleckhuddrersfax. Even though the majority of committee members are from Yorkshire, they were magnanimous and unanimous in making this year's winner...Ian for "Shooting Parrots" (Manchester, England) WELL DONE IAN!