Angela Merkel and Nicolas Sarkozy, political leaders of Germany and France respectively are always meeting up these days. You see them on television greeting each other and there's plenty of bonhomie in the air when these two are around. Heaven knows what their respective spouses make of these love-ins. Certainly Merkel's husband should watch out as Sarkozy is already on his third wife and could be on the look-out for a fourth. Though we see the two of them meeting we never hear what they're saying to each other. Beowulf, a deaf friend of mine is an expert linguist and lip reader. He has kindly transposed snippets of their dialogue into plain English. Hence:- 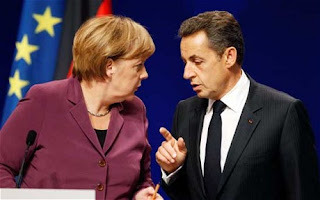 SARKOZY German wine is like urine in comparison with ours.
MERKEL Rubbish! You can't beat a good hock. 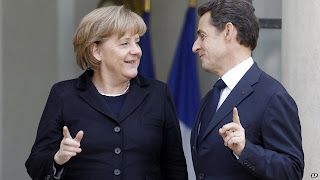 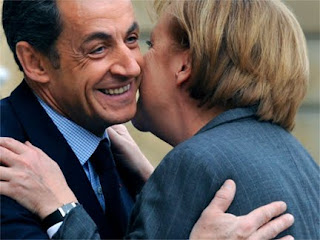 MERKEL Wanna cement our international relations after this meeting?
SARKOZY I'd love to explore your eurozone.
MERKEL Hang on. Who's that creeping up behind me?
SARKOZY Don't worry my little fraulein, it's only that irritating English salesperson - Thatchmeron! 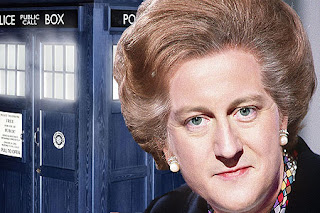