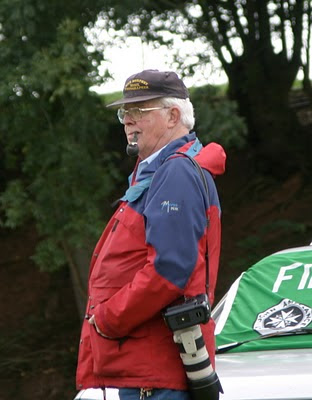 Who is that? Is it the "Milk Tray" man? Is it a senior member of the paparazzi or a Tory MP at a show jumping event? No. It's none of those, it's Lord Mick of Bristol, blogger extraordinaire, grandfather, Popeye impersonator and all round good egg. Even better is the fact that he's just sent me a cheque for seventy four guineas in order to secure a guest spot in this former Yorkshire blog - now transferred to Blogland. For seventy four guineas you too can have a guest blogpost published here - free to all Yorkshire bloggers but double for French bloggers and Lancastrians.

Why was Mick so keen to appear here? Well, he wanted to tell his story about how he was thwarted in his determined efforts to get to Blogland and how he still plans to get here. You can take the man out of the army but you can't take the army out of the man...

I arrived at Manchester Airport and reported to the Reception as instructed only to find they had no knowledge of me or any tickets to fly to Blogland , I asked them to check and check again only to be told by a very unhelpful receptionist no airline tickets for me or any other come to that, funny that I thought !!!!, I asked to see the Airline manager and explained to him that  YP had reserved them a few days before, the manager went off and on his return confirmed what the receptionist had said “NO  TICKET” or reservation had been made.
I toured around the other Manchester’s Airport Airline reception desks and told exactly the same, NO TICKET or reservation, eventually the Airports security staff arrived, two rather large foreign gentlemen gentle they were not and roughly manhandled me outside.
I reversed charged telephone call to daughter No 1 and explained the circumstances and she said she would come up the next day in one of her vans and collect me and I could stay with her until I made other arrangements.   No problem there.
Fast forward one week.
I contacted [e-mailed] one of my old Army mates who when he retired bought into a 40-M class A  square sail rigged ship and for the last thirty years or so has been operating a trading company in the Far East going around the various island in the Pacific  shipping small cargo items along with training crews in seamanship with some holiday tourists.    I received an e-mail reply and he told me he would be back in the UK for a refit and have ‘Her‘ in dry dock for a bottom scrape.   I met him last week and I know people say when they haven’t seen someone for years they don’t look any different - true, he’s still the dashing [although I did see some grey hair there] Bronze Atlas looking 6-foot man also I had the pleasure to met his wife as well and for me they’re like ‘peas in a pod‘ ideally suited, a fantastic couple.
I explained my circumstances about my wanting to escape to Blogland, wanting rid of all the corruption and the nauseating trappings of this so called modern way of life with all its  negative  rules and regulations
I suggested that on his next trading commission to the Far East I could accompany him working my passage as part of the crew.  I am a certificated Sailing Ship deckhand having gained my experience in training on a three master albeit some 50-years ago - [true] but I explained because of age the days of swinging through the rigging with the freshening breeze in my hair and a shanty on my lips have long since gone perhaps it would be better me just working on the deck.    Skipper Tinsel - [Don’t ask me how he got that name I don’t know] offered a ‘Galley Cooks ‘position together with being the ships radio operator and helping the ships carpenter should the need arise, he mentioned I would have to keep the ‘Ship’s Bell’ polished, its a tradition the galley staff have to do - [I’ll bet a lot people didn’t know that?].   I immediately signed on.
Missing out on the Air ticket has been a blessing in disguise no longer limited by a weight limit I am now able to transport some items I would otherwise have had to leave behind, my carpentry tools, cooking utensils, camera equipment and a small library of books.
I’m making arrangements with an agent in Singapore  to collect some live stock, chickens, pigs and a collection of various tools when we dock at Singapore a for a three days lay up.
We set sail on June the first, sail out of Southampton and make passage to our first port of call to pick up a  French cargo - [I believe it to be 4-tons of metaliferous ore].   then onto Brest, a 1-day layup, take on fresh provisions for the expected route through the Bay to Santander, Porto [take on wine casks] Lisbon, Nouakchott and then around Cape Province - [Cape of Good Hope].   Hopefully I will be more informed of the future route and course later on.
My estimated time its going to take to arrive in Blogland looks to be about ten or eleven weeks so should be arriving around mid August - [ETA 22nd/08]
The accommodation I have been allocated ‘Driftwood Cottage’ sounds idyllic, I note from the position on the map its terraced on a hill with only one path access and isolated from other islanders, good, that just what I wanted.
Looking forward to meeting up with other Bloglanders.
More details to come given time and internet access - Mick