The servants are becoming bored and disenchanted with their lot. I think if they had plenty to do they'd have no time left for whingeing but with only one immigrant to cater for they're getting a bit restless. I can see it in their eyes. This evening Madam Elsie - the head cook - was cursing in Burmese when she plonked my dinner plate down on my poolside table. The gravy swished about in my giant-sized Yorkshire pudding like a mini-tsunami. I was not amused.

Recently, I have sensed some dissatisfaction with accommodation arrangements from emigrants who haven't even stepped foot in Blogland! "I don't like this" and "I don't like that" and why's my villa near the  sewage plant and why has John Gray got such a nice living area? Frankly, such moaning leaves me cold. I mean, why can't people just be happy with what they've been given? They should follow Daphne's wholesome Yorkshire example. She simply said, "I'm just happy to be so near to the beach. Everyone else's comment is really thoughtful but I'm just going - - PALM TREES! SEA! HURRAH!" That's what we want in Blogland. Positivity!

Earlier today, I visited the beautiful Plague Beach just west of the island's state-of-the-art sewage treatment plant. This is where Mr Robert Brague's Balinese-style accommodation was erected at great expense. I wandered around inside, checking that the finishing touches had been completed in line with the contract. Honestly, it was stunning. A luxurious rainforest shower in a split bamboo-lined bathroom with his and her lavatory bowls right next to each other allowing for idle conversation during synchronised toilet visits.

The king size bed that Mr Brague had insisted upon was hardcarved by Balinese craftsmen. On the bed-head there's a sort of frieze showing Eve taking the apple in Eden and Adam hiding behind a tree. Luxurious pink fluffy bathrobes with embroidered letters "R" and "E" hang from pegs. Of course in the kitchen there's a popcorn maker, several jars of American peanut butter and a dozen bottles of best Kentucky bourbon. However, the Bragues' two servants were nowhere to be seen.

I took a couple of pictures. Here's The Brague Place:- 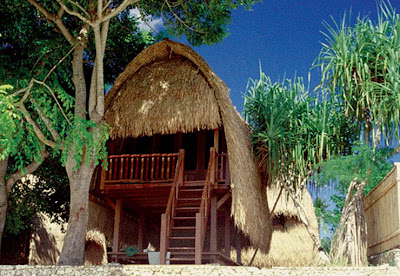 And this would have been their stunning view of Plague Beach:- 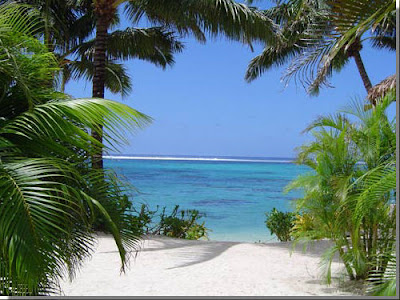 By the way, the natural odour from the sewage plant was almost non-existent when I visited. There was a light breeze blowing in from the bay.
- April 17, 2012