Cardiff is the capital of Wales. We drove down there on Saturday morning. M1 to M42, M42 to M5, M5 to M4 - then across the Severn Bridge to that land of harps and daffodils, sheep and rugby, leeks and male voice choirs, Earl Gray and Dame Jenny. The journey took three hours and forty five minutes. We parked at the international athletics stadium and then wandered across the road to a giant ASDA superstore with its attached cafeteria.

All the tables were occupied but a man on his own signalled that we could join him at his table. He was squeezed into one of those electric mobility scooters and at first sight he looked as if he was in training for the Fattest Man in Wales competition. But he was a nice fellow - quite intelligent and somehow he let it be known that he hadn't always been disabled. Diabetes had been his downfall and he admitted that he was in something of a Catch 22 situation with regard to his health. The pounds had piled on and his inability to exercise or burn off calories had turned him into a a huge, wobbly Welsh pudding.

Michael David - for that was his name - was in that neck of the woods for the same reason as us. We had come to watch the Premiership football match between Cardiff City and my beloved Tigers - Hull City. Cardiff City's new stadium is on the other side of the ASDA car park. Our teams have something in common in that both have prosperous. power-crazed chairmen who have shown scant regard for our clubs' histories or heritage. There were two intriguing chants that both sets of fans joined in "You're Cardiff City - You'll Always Be Blue!" and "Stand Up for The History! Stand Up for The History!" I could explain the details of what lay behind these chants but we'd be here all day.

Anyway the main thing is that Hull City thrashed Cardiff by four goals to nil. It was men against boys and it could have so easily been six or seven nil. Cardiff looked as if they had no idea how to score and our lads were purring like the Yorkshire equivalent of a Ferrari engine. Two goals from Nikica Jelavić and one each from Tom Huddlestone and Jake Livermore. That's the kind of away day you want. And we were captured by Getty Images - to the very left of the photo below. I added the arrow myself. Shirley is mostly obscured by the people in front of us but even so we are now celebrity supporters:- 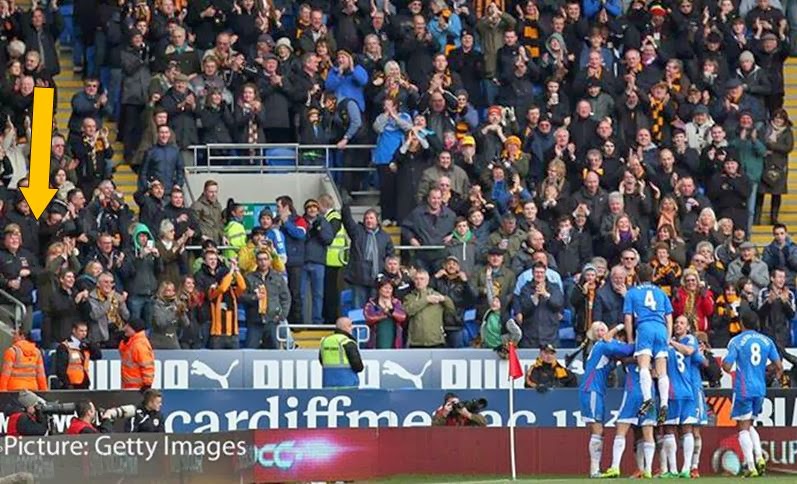 After the game we drove to Barry as most hotel rooms in Cardiff had been taken up by rugby supporters from the Friday night Six Nations game between Wales and France - also played in the city.

We stayed at the economical Mount Sorrel Hotel. After depositing our bags, we wandered down to the Borough Inn on the High Street for a couple of celebratory pre-dinner drinks. Then on to the Shahi Noor Tandoori. Lamb balti, potato rice, nan bread - all very nice. Then afterwards up to "The Park" for a couple more pints and then "Match of the Day" back at the hotel.

In the morning, we ate breakfast looking out towards grey clouds over the Bristol Channel and to Barry Island which is where we spent an hour before driving into Cardiff City Centre for a good look round. Neither of us had ever been there before. We also went to Cardiff Bay. Though the weather stayed dry, that veritable eiderdown of thick grey cloud remained over us - not the best light conditions for photography. Anyway:-
- February 24, 2014