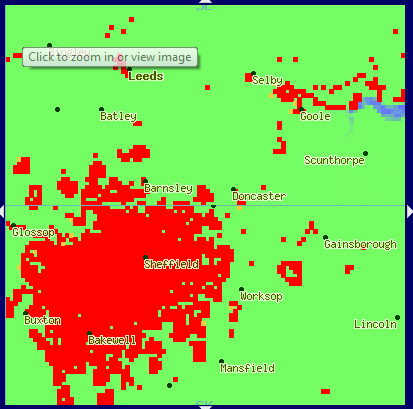 It's like a military campaign map. The red blob and the satellite red bits reveal where I have taken photographs in this region of England for the geograph project. I have red squares in other parts of the country too - from Cornwall to Fife and from Liverpool to Kent. I took up this hobby in 2009 since when my blob has grown like a pool of red wine on a laminate floor. The hobby involves several things apart from snapping pictures. There's miles and miles of walking, study of maps and map reading, internet research of the places I have been and the things I have seen. Through geograph I have learnt more than I knew before of England's beauty, its history and its incredible diversity.

Here's two pictures I snapped yesterday afternoon for geograph when Shirley and I were in our local park to attend the Folk Forest music festival - part of the annual Tramlines festival of music in Sheffield:-

Learning about my hobby you will probably think I am sad or mad or both. I don't care. These boots are made for walking and I shall not cease till my red blob has grown to cover all of northern England when I shall become The Regal Master of Up North  instructing my people to build a mighty wall - separating us from the evil excesses of Down South led by Snooty Cameron with his posh army of  Etonian Bankers. And there will be free beer and fish and chips and I'll re-open the coal mines and southern settlers will be given twenty four hours to leave and, and "If I Ruled the World"...
- July 28, 2014