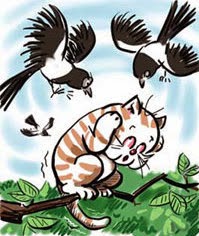 Why do cats climb trees? After all, with the structure of their claws, they are far better at climbing up things than climbing back down. This is why fire brigades are frequently called out to rescue cats from rooftops or high branches.

Up our suburban garden there are four mature apple trees which soar in a gnarled kind of way twenty five feet from the ground. Yesterday morning I noticed something very high in the middle tree - a young black cat. He was on one of the loftiest branches and fearing for his safety I watched some more.

Near to him on an even higher branch was a magpie. Even from our kitchen I could hear the bird cackling at the cat. As the magpie hopped over to a higher branch, the cat seemed infuriated and eager to follow.

Then I noticed a couple of other magpies in two neighbouring trees and two crows flew in as well and there was a jay. They all kept dancing about and it struck me that they were in fact  bating the cat, deliberately daring it to climb higher. They were making the young animal risk its life - I am sure of it.

If the young cat fell to the ground he could easily be fatally injured and then the feathered omnivores would enjoy a feline feast of fresh young cat meat. This is a phenomenon I have never observed before though I am well aware that members of the crow family are highly intelligent, cunning and inventive.

We think of cats as predators but on this occasion, though Tiddles didn't know it, the gang of birds were the true predators. The tops of trees are avian territory and that young cat had climbed out of his comfort zone. The birds were willing and able to make a meal of him. Either that or they had just invented a daring new sport called "Tease a Cat".
- February 23, 2015