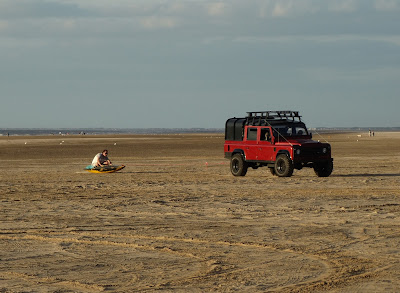 We were supposed to be on our way to Southport but at Ainsdale-on-Sea we followed a signpost that led us down on to the beach.

Here, on the Lancashire coast, the sea goes out for miles and the beach is endless. The sand is not soft and  golden - a place for bare feet to sink into. No, here the beach is so hard-packed that vehicles can drive upon it. Some visitors see it as a natural race track and it would be a great place to learn to drive because there are no walls or trees, kerbs or road signs to run into. Mind you, it would be wise to watch out for the incoming tide.

Above you can see a red Land Rover pulling a fellow along. He is sitting in an old canoe. They seemed to be having a splendid time. It is not a sport I have ever encountered before and have no idea what it is called. Dry Canoeing? Beach Slalom? Bumpety-Bump? Anyway, it is clearly something Lankies enjoy. Perhaps Lancastrian Graham, The Laird of Eagleton, participated in this daredevil motor sport during his salad days. Hence the knee replacement. 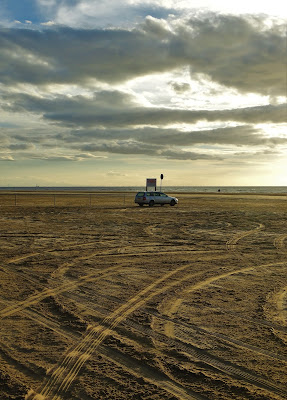 It was about half an hour before sunset so we decided to wait. Above, a dog walker has parked his estate car by a sign that advises beach drivers not to proceed further along the sands. The next place you reach is Formby where an amazing discovery was made by retired schoolteacher Gordon Roberts back in the late nineteen eighties.

In hard mudflats exposed by the outgoing tide, he noticed some odd footprints. How had they got there? There were animal footprints and human footprints too. It turns out that these footprints were made approximately 7500 years ago and they are still being exposed. Sadly Gordon Roberts died on August 23rd of this year but you can read all about the Formby Footprints here. 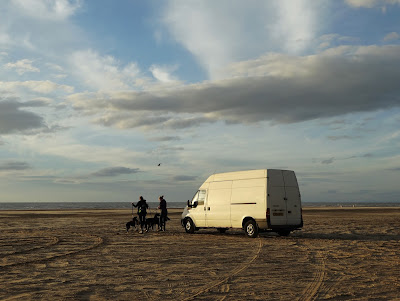 A big white van appeared on the beach and two women got out. They opened the back of it and released a pack of excited dogs, ready for their evening walk.

You never know for sure how a sunset will turn out even minutes before the golden orb disappears in the west. Will it be fiery red or subtle - as it painted by a watercolourist? I took about twenty photos at the water's edge and this was one of the best:- 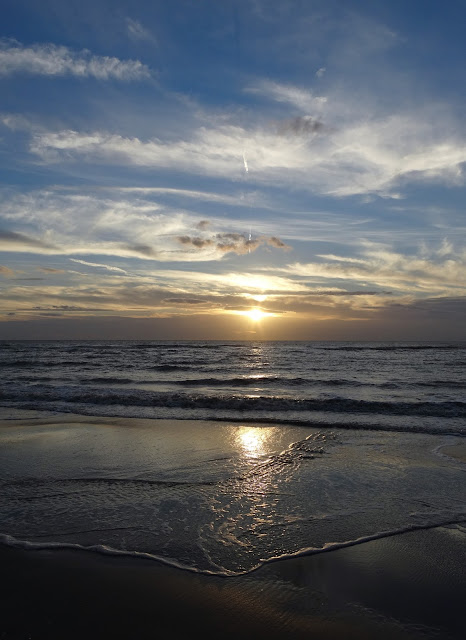