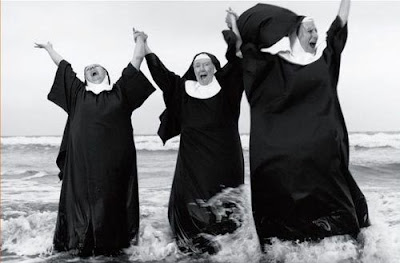 Picture this. August in France, 1998,  and we are basking on a quiet beach on the Atlantic coastal island of Noirmoutier. Behind the beach there's a rambling walled property. We can see turrets and chimney stacks.

In the middle of that hot afternoon, the gate to the old seaside property opens and out comes a giggling gaggle of Catholic nuns. There are seven or eight of them all dressed in their black religious garb complete with white coifs and black veils to cover their heads.

Still giggling girlishly they proceed to the water's edge, raising their dark robes to paddle in the sea. They are having fun which is a little surprising as being a nun or a monk usually smacks of seriousness, self-sacrifice and large dollops of misery. Such is the power of religion.

But the thing is this. Gendarmes did not appear on the beach to arrest these nuns. After all, their beach attire was little different from the prudish Muslim "burkini" that has proven to be a source of  great controversy on French beaches this summer.

Just the other day a young Australian Muslim called Zeynab Alshelh was driven off from a beach on The French Riviera for wearing a burkini. Apparently, other beachgoers, probably dressed in pornographic thongs and skimpy bikinis, had vehemently objected to her chosen beachwear.

I have no doubt whatsoever that if Zeynab had been dressed as a Catholic nun - like those giggling young women on the Noirmoutier beach - her presence would have raised no objections at all. Ironically, the selective  intolerance being shown in France can only fuel Muslim extremism. Besides, to avoid the possibility of skin cancer, it is surely wise to cover both head and body on a sunny beach.
- September 20, 2016