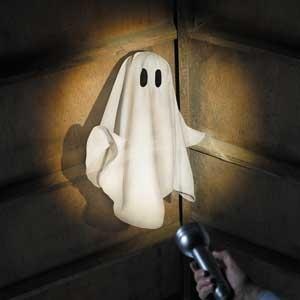 I know that the revelation I am about to make will disappoint or irritate some visitors enormously. Pause for dramatic effect... Ghosts do not exist. In other words, there's no such thing as ghosts. They are  all born in the imaginings of the human mind.

For complex socio-psychological reasons, it is as if many folk actively want the delicious mysteries that ghosts represent. They want that uncertainty, that sense that there is something other than humdrum everyday reality. And perhaps belief in ghosts is connected with a deep-seated desire for there to be an afterlife - the promise that earthly life continues beyond death.

But it is all balderdash, poppycock, hornswoggle and tommy-rot.

Many's the time that I have walked alone through two local graveyards at night - a half moon turning the old gravestones silver white. Perhaps an owl will hoot from the sycamores, perhaps I will hear a noise behind me... but it's just an animal or the breeze blowing a tree limb against masonry. I could happily pitch a tent there and sleep as soundly as a baby, safe in the knowledge that no ghosts will come along to disturb me. There's as much chance of that as King Arthur arriving with Excalibur in his mitt.

I can't bear books, TV shows or films that are built on the premise that ghosts exist. They are so tiresome. One of my favourite novels is "Wuthering Heights" and there's a supernatural apparition in that but it's all  just in the mind of Catherine Earnshaw and a small feature of the novel - created for literary effect.

Long ago I was on the island of Rotuma in The South Pacific when the eye of a 120mph hurricane passed over us. Many houses were destroyed and many coconut palms were blown over like skittles. The eye arrived in the middle of the night bringing a strange calm. I said I would walk up the track to the government station at Ahau to tell them what had happened down in the village of Motusa.

Village people who were taking shelter in the house I shared with Peace Corps volunteer Richard were flabbergasted that I  had walked up to Ahau in the dead of night and returned safely. They insisted that the road was haunted but my only obstacles had been the palm trees lying across the track. I could have walked that way a thousand times in the dead of night and no ghosts would have leapt out on me or waited for me in the shadows.

Let me re-address my opening assertion... Ghosts do exist - but only in people's minds. They are not present in the world around us. They never have been out there and they never will be. The half-secret cult of the ghost is like an extended party game or a shared condition that sufferers freely subscribe to. It fulfils a need, that's all.

I look for ghosts; but none will force
Their way to me.'Tis falsely said
That there was ever intercourse
Between the living and the dead.
William Wordsworth "The Affliction of Margaret" 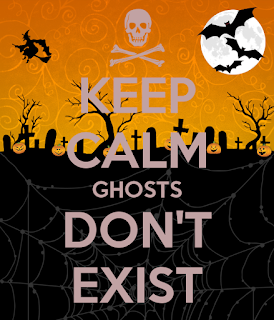