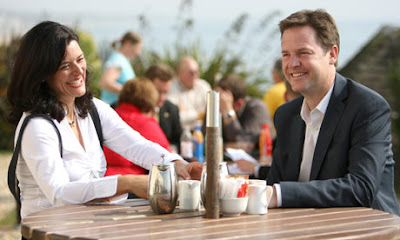 Theirs was a love that defied international boundaries. He was a Cambridge graduate who dabbled in Conservative politics. She was a flamenco dancer from the peasant flavellas of Valladolid. One steamy night in Benidorm, she entranced him, her heels clicking to the plaintive strumming of a Spanish guitar. She said her name was Miriam. He said he was called Nick and that he was sunburnt.
Just below the "Lord Nelson" beach bar, their bottles of "San Miguel" clinked under a sultry Mediterranean moon. He said his mother was Dutch and that his father was half-Russian. She said she was falling in love.
A veritable Casanova with thirty notches on his John Lewis reversible belt, Nick whispered huskily, "We shall have babies Miriam... three boys and we will give them solid English names as would befit a future prime minister. Arthur Clegg after our mythical king. William Clegg after my liberal hero - William Ewart Gladstone. And Jeremy Clegg after the great Paxman of the BBC!"
"No effing way!" screeched Miriam. "We will name them after the fiercest captains of the Spanish Armada - Antonio, Alberto and Miguel!"
"But my little Iberian paella. Those names will not sound right if followed by the solid English surname Clegg... I mean Alberto Clegg? It sounds like a stand up comedian!"
"Well senor unctuous academic with only five years as an MP behind you," leered Miriam. "You either accept my name choices or I'll be making a play for Uncle Vince Cable, the noxioius Labour renegade."
Unable to press his point home, Nick quickly caved in. They were married the following springtime - he in medieval garb and she in a flame red flamenco frock with white spots and puffed sleeves. Instead of "The Wedding March", a David Bowie number was played - "All The Young Dudes" and guests included the investigative broadcaster Louis Theroux who remembered his 80's USA road trip with Mr Clegg when the aspiring politician would sometimes disappear for hours on end for sessions of transcendental meditation. Quite unusual for "Rodeway Inn" guests and often a nasty surprise for Puerto Rican room cleaners. 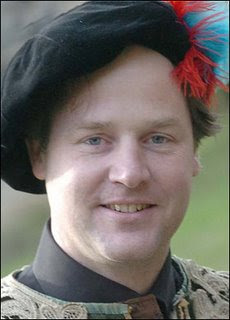