Who is that lying next to me on our sofa? Why it's Biscuit, the wire-haired Jack Russell. He's staying with us for a week while his owner is on holiday.

I have already taken him on several walks. Though he is small, he likes a good long walk and his little feet patter along as if in a film that has been speeded up. These walks have been characterised by an enormous amount of sniffing - not by me but by Biscuit. His world seems to be dominated by his sense of smell and often a careful halt for sniffing is followed by a squirt of urine. I guess he is marking territory covered. It pleases me enormously that as a male human being, I don't have to do this when walking city streets or country paths. 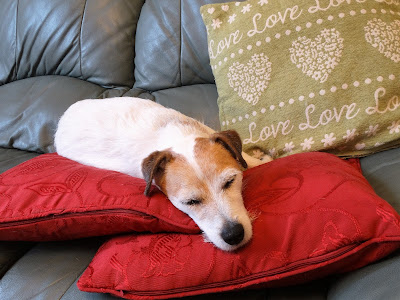 I don't know much about dogs because we have never owned one and growing up in my East Yorkshire village we only ever had Oscar, a tortoiseshell pussy cat who, in spite of the name, bore several litters of kittens. She died at the age of twenty, long after I had left home.

No I don't know much about dogs but I am learning. When out and about with Biscuit you have to be alert to the presence of other dogs. When Biscuit spots another member of the canine family he goes berserk, barking and straining on his lead with murderous intent. It doesn't matter how big the other creature is, Biscuit will have a go at it and if he wasn't on the lead, blood would certainly be spilt.

The rest of the time he is mild-mannered and lovable. He looks up at you with his soulful brown eyes and you have to guess what he is trying to say. Mostly it's "Get off your fat ass and let's go for another walk. I need to do some sniffing and leg cocking! Let's go buddy!" Soon I shall take him to The Botanical Gardens where three elephants are located from The Herd of Sheffield. He'll enjoy sniffing those big mothers.
- July 24, 2016