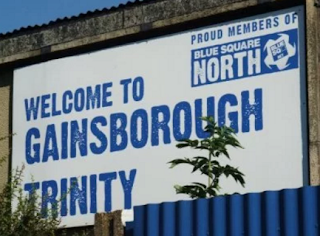 A wedding in Gainsborough. Shirley has a large extended family with enough cousins to fill a double decker bus and yesterday cousin Elaine was getting hitched to an abattoir worker called Steve. It was his third marriage but her first. They are both in their mid-fifties and as poor as church mice.

Gainsborough sits on the eastern bank of the River Trent and has been an inland port for hundreds of years. Vikings came here and medieval wool traders from The Low Countries. It is still a bustling town.

The wedding ceremony was in the town's register office. Then we moved on to the supporters' club at Gainsborough Trinity's football ground. There were almost two hundred people there and as I looked around them, I realised that they were all white and Anglo Saxon. Not one member of our Asian community. Not one Afro-Caribbean and not one person of mixed race.

If I had undertaken a survey of those seated at tables I am sure I would also have discovered that there were no Poles, Latvians, Romanians or indeed French. No this was the white Anglo Saxon English heartland and these were the kind of English people who have experienced a sort of sidelining in recent years. Britain is meant to be vibrant and globalised with an exciting rainbow patchwork of interconnected cultures but in the Gainsborough Trinity supporters' club a different kind of England was represented.

It reminded me of growing up in East Yorkshire. I lived in an entirely  white Anglo Saxon village and after passing my eleven plus went on to a totally white Anglo Saxon secondary school. We just didn't see people of colour though I once saw a Chinese sailor on Alfred Gelder Street in Hull.

There are still huge swathes of England where the multicultural melting pot seems like a metropolitan fantasy. You can see this in demographic statistics. 92% of our people belong to the white Anglo Saxon host community. Yet watching the BBC or listening to the London politico-intelligentsia you might be forgiven for believing that every other house is home to inhabitants whose origins lie overseas. But this is most definitely not the case. You might also have witnessed evidence of  this at The Gainsbrough Trinity supporters' club yesterday evening.

The wedding guests were decent people - the backbone of England. People whose parents and grandparents were born here. Tolerant and fair-minded people. They all had family members who fought in the trenches of the Somme and all could trace their English roots way back in time. As I say, lots of these people now feel sidelined and I am sure that many of them voted to leave The European Union because of that feeling. They were cocking a snook at the establishment and yelling in the only way they could - "Look at us! We are still here. Why did you forget us?"
- July 11, 2016