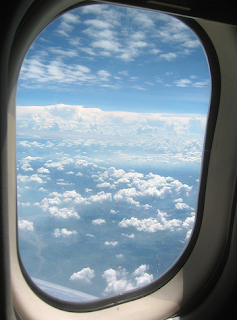 Of course I could carry on blogging about Kefalonia but I don't want to bore my esteemed visitors to death. No. Instead, I will just reflect on the flight home.

It was in 1972 that I first boarded an aeroplane. I was on my way to New York and thence to Los Angeles and Hawaii. Looking through the little oval window next to my seat I was in awe of the world I saw below me. England's green patchwork fields, little fishing boats in the Irish Sea and then the emerald jigsaw of Ireland before we crossed the wide expanse of The Atlantic Ocean. Truly fabulous.

And I never lost that sense of wonder about looking out of aeroplane windows. I estimate that I have taken about two hundred flights in my life and I am always disappointed if I don't get a window seat. To look down upon our planet  is something our ancestors could only dream about - high above the land and the water like a bird.

On Wednesday, we flew up the Greek coast towards Corfu and then on to the islands of Croatia. There were so many of them, dotted about the eastern shore of The Adriatic Sea. In fact, Croatia has 1246 islands - and I must have looked down on half of them. Little ferries moved between them like ants and there were tiny yachts anchored far below  in Lilliputian bays.

Then on to Venice. I recognised its shape immediately. There was The Grand Canal and there was the oblong island of San Michele -  the cemetery island. Beside it Murano - the island of glass.
Soon we were over The Alps - great jagged teeth pointing angrily at the sky and snow nestling in the highest plateaux and valleys. Hidden little mountain lakes in green and blue and over there Mont Blanc and Lake Constance. It was the best view of The Alps I have ever had. As clear as a bell.

Onwards, ever northwards over the summer fields of Germany where tiny giggling frauleins were no doubt being chased through flowery meadows by miniature men in lederhosen. Then over the border into La France where insect-like men in striped shirts carried minuscule strings of onions on bicycles while humming "Sur Le Pont d'Avignon". Then over Paris with a distant view of The Eiffel Tower.

Crossing the English Channel took four or five minutes before the little fields of Kent and East Sussex appeared. And there underneath our big steel bird was Biggin Hill's famous airfield and there London's orbital motorway - The M25 - already clogged up with early evening traffic.

Soon we were flying over the metropolis of London itself. I spotted The Oval cricket ground and then the silvery ribbon of The Thames before Arsenal's Emirates Stadium came into view. I told Shirley and she unbuckled her seatbelt to have a look because our son Ian lives bang next to that football ground. We waved but he didn't see us and then one of those painted waitresses they have on aeroplanes appeared in the aisle to tell Shirley to buckle up again.

Watford and Luton then up above the M1 to the city of Leicester with a good view of The King Power Stadium before the aeroplane swung round to make its descent to East Midlands Airport. The farms and villages grew closer and there were interesting lumps and bumps in some of the fields - perhaps hinting at hidden archaeology. And then we were down.

Yes I still love to look down from aeroplanes - like a child at a sweetshop window. The wonder never diminishes. How about you?
- July 08, 2016