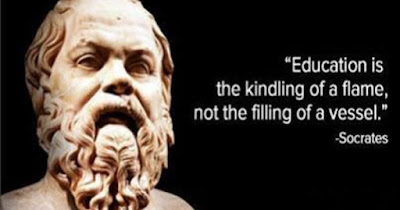 In a recent afternoon  conversation around a patio table, the topic shifted to higher education. I said that there was a time when intelligent young people picked subjects they were interested in. They weren't so focused on the careers that would follow after their years in university. These remarks caused a ripple of chortling hilarity - as if I was implying that such choices had been dumb or self indulgent. In our wisdom we could surely all see that  higher education is principally about getting a good job in the end.

The others sitting round the table had misread me. I was in fact bewailing a general shift in perceptions about higher education. Nowadays it sometimes all seems to be about getting qualifications that lead directly to a good career and damn the intellectual interest value of it all. In contrast, I still believe in the love of study and passionate enquiry. Focusing upon a subject you're interested in instead of  calculating one's future financial status.

When our lovely daughter Frances Emily was thinking about university, she really didn't know what to do. She gained good A levels in English Literature, Theatre Studies, General Studies and Sociology but didn't want to continue along any of those routes. One day I threw into the mix the idea of American Studies and that seed took hold. She ended up completing a degree in American and Canadian Studies at The University of Birmingham. She enjoyed the course. It lifted her in various ways and in the end she came very close to achieving a first. She also got to spend two semesters in Birmingham, Alabama.

It was not about getting a good job. However, as it happens, she now has a good job - working on the twenty sixth floor of The Shard in London as part of a young team providing innovative software for recruitment agencies. A few months ago she questioned the usefulness of her years at university with the associated student debt but I pointed out that she had found the course stimulating. Besides, though not directly linked to her current role, her degree had honed her intellectual skills, bolstered her vocabulary and opened windows in her mind that allowed her to step into her present position.

Even today, it is possible to study subjects that fit your nature, things you are simply interested in without having to look too hard at the future. Higher education should not be mechanistic - just a means to an end. In my opinion, that now widespread perception goes against the grain of what education is meant to be and I find it rather sad. There is something quite noble and laudable about learning simply for the love it and as Socrates said, "kindling a flame".
- July 22, 2016