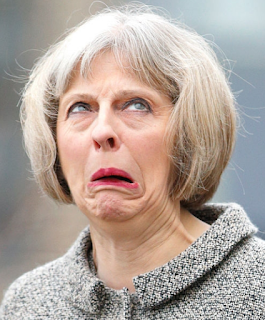 Theresa Mary May - born in Eastbourne on October 1st 1956 - and now Great Britain's eighty first Prime Minister. But who is she? The following quotations give a real sense of the character of the woman behind the headlines.

"I was in the Commons recently and saw a young lady wearing a nice pair of shoes. I said I liked them and she said my shoes were the reason she became involved in politics."

"I'm not sure I should reveal the sources of my clothes."

"My night out would be with my husband, wherever he chose to take me."

"I was a teenage godmother."

"I'm not someone who feels anger on particular issues."

So there we have it. Britain's answer to Angela Merkel... or maybe our answer to Hillary Clinton. During these challenging political times, it is comforting to know that our ship is being sailed into the future under the watchful guidance of  such a passionate and capable skipper. Someone with her finger on the pulse and so heavily endorsed by the electorate. As the song said:-
May each day of the week be a good day,
May the Lord always watch over you,
And may all of your hopes turn to wishes,
And may all of your wishes come true.