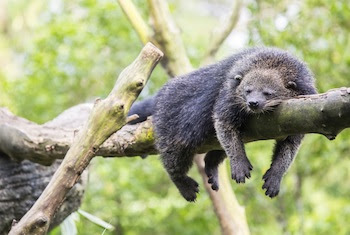 In Bangkok there's a zoo. I visited it one afternoon. As well as expected animals  like Asian elephants, seals and penguins there were animals that I had previously  never heard of. Most of these came from the jungles of South East Asia and of course the continuation of nearly all of these species is now threatened.

One of the animals I saw was a binturong, sometimes called a bearcat. Binturongs may be found throughout South East Asia, including Sumatra and Borneo. There are at least nine sub-species of this animal.

Though binturongs are not especially agile, they spend the majority of their time in the branches of trees. They enjoy long periods of inactivity. They are omnivores - foraging for whatever they can find to sustain life - including smaller mammals, insects and jungle fruits. 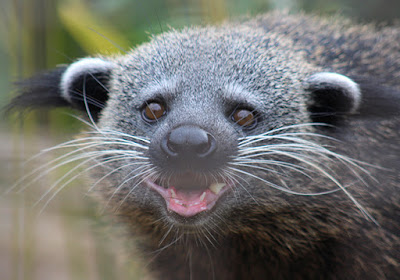 The binturong is normally quite shy, but aggressive when harassed. It will initially urinate or defecate on a threat and then, if teeth-baring and snarling does not deter the threat, it uses its powerful jaws and teeth in self-defence. When threatened, the binturong will usually flee up into a nearby tree, but as a defence mechanism the animal may sometimes balance on its tail and flash its claws to appear threatening to potential predators.

The creature's natural lifespan is around twenty years though some captive binturongs have lived longer than that.  They have very few predators. In fact, you will not be surprised to learn that the main threat to their existence is loss of habitat through deforestation.

I am happy to live on a planet that still hosts binturongs. I would be much less happy to learn that they have all gone the way of the dodo and the Tasmanian tiger. Frankly, there are too many people on this spinning sphere and not enough binturongs. Save the Tiger! Save the Rhino! Save The Blue Whale! Save the Binturong! For more information about the binturong please go here. 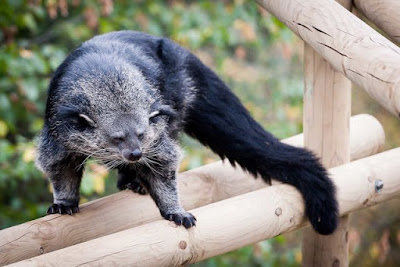