Today, Friday, sunshine illuminated the rolling moorland west of Sheffield.  In spite of the brightness, a bitter wind blustered down from the Arctic. I was sensibly attired with lined walking trousers, a thermal hat and gloves as I set off westwards from Mortimer Road.

My first destination was a triangulation pillar on Emlin Ridge. Like all of the other triangulation pillars that are dotted about the British landscape, it was erected to facilitate accurate surveying and mapping. The pillar is not visible from the road and there are no paths there.

I strode through rough moorland vegetation over knolls and hidden rocks until the old concrete pillar came into view. Very few people have taken photographs of this one so I took several. Then I had to decide whether to carry on westwards across the rough terrain or return to the car. I decided to carry on. 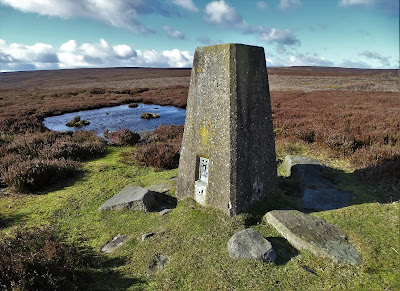 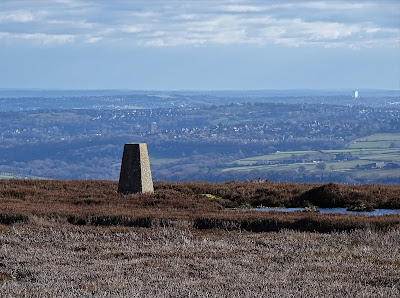 After a mile of yomping, I reached the top of Wet Slack Ridge and surveyed Wet Slack with Hobson Moss beyond. Up there the moorland has a wild kind of beauty, devoid of trees. Today I was surprised by the relative dryness of my route. I had been expecting the going to  be so much tougher because usually at this time of year the hills are soaked with winter precipitation like a giant sponge and every footstep squelches.

I turned back towards Emlin Ridge. Just after passing the triangulation pillar once more, I had a lovely surprise. There was a flash of creamy whiteness. as a beautiful mountain hare left its rocky hiding place and wheeled in front of me, heading for safety.  Even though they are very rare in The Peak District, mountain hares are still occasionally shot by members of the grouse shooting fraternity.

It was a delight to be out in the wild in early February, alone in the moors with clouds scudding overhead and red grouse cackling in the heather. It is on days like this that I feel truly alive.
- February 09, 2018