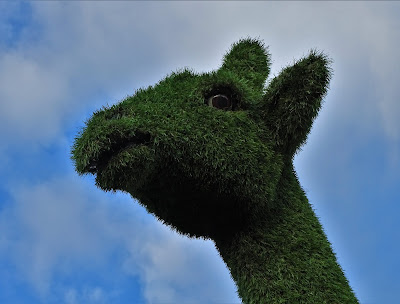 Have you ever ridden on a giraffe? If you have you will also know how invigorating such an experience can be. The second time I met Albert, I got to ride on his back, my arms wrapped round his neck, intent on survival.

It was two days after the initial meeting. I waited in the clearing where I had first met Albert. Grey American squirrels frolicked around as rooks cawed from the treetops. A jogger in a bright fluorescent vest ran by. Where the hell was Albert?

That's when I heard the chuckling. Albert had been watching me from the undergrowth all the time. I just hadn't seen him what with his green pelt and all.

Albert bent down and with his big blue tongue, he gave my face another rough lick.

"Nice to see you again Neil. Do you fancy a merry jaunt?"

Wiping the giraffe spittle from my face, I said, "What do you mean? A merry jaunt?"

"A romp. A canter. An outing or what did they call it in Africa? Yes! A safari!"

I was none the wiser but Albert splayed his legs and instructed me to "Get on board!"

It wasn't something I had been expecting but it would have been ungracious to say no. With some difficulty I shuffled up Albert's spine and following his advice embraced his neck.

Albert stood up and twisted his head back "Christ Neil! You weigh a ton! Are you ready?"

Not knowing what was about to happen, I said, "Yeah! I'm ready!"

And then we were off. At first the pace was gentle. We moved along the woodland path with Albert dodging overhanging branches. Then we reached a long slope that descends to Limb Brook. Instead of galloping down, Albert chose to slide down on his arse, yelling "Whee!" as I bounced up and down like an amateur jockey in a steeplechase.

Albert crossed Limb Brook with one mighty stride. Then like lightning we were up the opposite bank, through the trees and out into a big, green clearing which .I recognised as Whirlow Playingfields. He waited at the margins and scanned the open area but there was nobody else around.

"I love this place!" he laughed.

Finally I had to cry out, "Stop Albert! Please! Stop!"

He pulled up in the middle of the sports ground - right in the centre of the cricket pitch.

"Did you enjoy that?" asked Albert breathlessly and I had to explain that he had frightened the bejesus out of me and that my sore bottom felt as if it had been kicked repeatedly by a donkey.

Albert sounded crestfallen and offered an apology before promising to cut out the crazy galloping from now on.

When there was a break in the traffic we crossed the A625 and lolloped through the entrance to Whirlowbrook Park, hiding in the trees at one point as a couple of joggers trotted by.

Past the duck ponds and the old hall then out through the back of the gardens.

"Keep your head down!" Albert advised as we dodged branches in the beech plantation.

Then back over the bubbling Limb Brook and on to the long path that leads to the moors. I was starting to enjoy my vantage point and Albert's more leisurely pace. Soon we were out on the moors,  gambolling through the heather and the gorse. When grazing sheep looked up they did so with astonishment but there was hardly time for them to run away. No sooner had we appeared than we were gone. I have trudged across those moors so many times but that day, high on Albert's back, it felt as if I was flying. It was a huge privilege.

At Lady Canning's Plantation, Albert stopped for a snack of deciduous leaves from the topmost branches. His long blue tongue gripped entire bunches which he masticated briefly before gulping  them down his long neck. "God! I love sycamore!" Albert confessed.