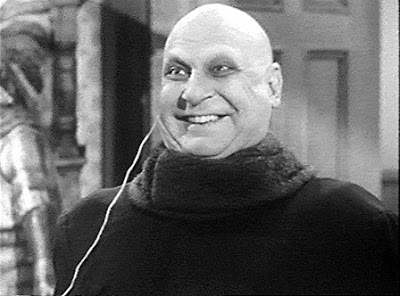 Every so often an old friend phones me up - usually at inconvenient moments - for a long chat. The subjects are repetitive and on every occasion we end up on his favourite topic - money. He thinks a lot about money - from various angles - personal, national and international. I guess that line from "Cabaret" is a true one - "Money makes the world go round" but I have always found money to be a deeply uninteresting subject.

Anyway, let's call the old friend Big Doug. Rather cruelly, some mutual acquaintances have described Doug as looking like an inflated version of Uncle Fester from "The Addams Family". He is socially awkward and intellectually he operates somewhere upon the autistic spectrum. That's why I have always tolerated his differences. He has been a good friend to me through the years and has only ever wished me well.

As well as being a little obsessed with money matters, his brain seems well-equipped for making big leaps of understanding that average folk never make. For Big Doug there are none of the usual  barriers. He collects tidbits of information and is then able to prognosticate or predict the future often with vivid certainty.

Big Doug and I have been out for many curry meals together. You might say that it has been a kind of culinary safari - seeking out the best or the most obscure curry houses in South Yorkshire and North Derbyshire.

A few years back, around this time of year, we arranged to go to a Bangla Deshi curry house in nearby Dronfield. First we had a pint in a Dronfield pub abd then drove up to the restaurant.

When we got inside, we were surprised to see that there were flowers and candles on every table. It looked very nice. Much better than the last time we had visited that place. The Bangla Deshi waiters seemed most attentive but I swore that a couple of them smirked at each other when we walked in.

The penny had not dropped with either myself or Big Doug but when it did drop, it dropped with an almighty resounding  clang. This wasn't just any mdweek night. It was Valentine's Night and already other couples were appearing at the curry house for romantic Valentines' meals! I found myself mumbling defensively to the smirking waiters that they had arrived at entirely the wrong conclusion.

The other diners looked across to see the most unlikely romantic  "couple" ever - Uncle Fester's doppelganger and Johnny Weissemuller's body double - your friendly blogging  correspondent Yorkshire Pudding. My laughing daughter reminded me of that Valentine's faux-pas when she phoned up yesterday evening. She knows how to press my buttons.