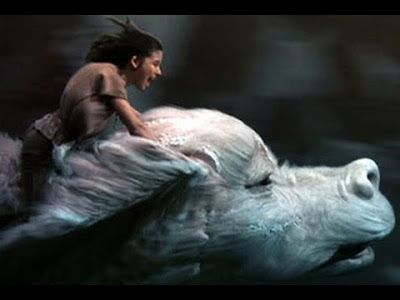 I was back in the woodland clearing where I had first met him. Grey-white clouds scudded over  the canopy. My memory of that very first ride remained vivid. In the end, it had been a truly beautiful experience. The stuff of dreams.

"I would love to try another one Albert but please don't gallop as hard as you did on the playingfields! It hurt like hell!"

Albert grinned mischievously. "Okay I promise." And he stuck out his big blue tongue as if threatening to lick my face again.

Once more I clambered up on his back  and hugged his neck as Albert stood to his full height.

"We're going further this time. Much further!" he chortled.

He ambled along the woodland path and over the stream. Soon we were back at the sports ground.

"Are you ready?" Albert asked over his shoulder. It was a question that slightly perturbed me and with good reason.

Have you ever seen that children's fantasy film, "The NeverEnding Story"? There's a scene in that where the little protagonist Atreyu rides on the back of the dragon Falkor. His quest is to save Fantasia from the malevolent force that is "The Nothing". They ride high above the clouds for thousands of miles to The Southern Oracle.

I was reminded of that scene that second time Albert took me for a ride.

This time we weren't running on the earth or bounding through moorland heather. We were above the ground and then we were above the trees. We were flying and Albert was laughing like a maniac.

"Hold on!" he yelled back but that command was absolutely unnecessary. Not wishing to die like a parachutist without a parachute, I was desperate not to fall.

Soon we were pushing up through the clouds that swirled around us like fog in a Sherlock Holmes story. And then we were up in the blue. Albert had no wings. He literally seemed to be running on air. There was no logic to it. It seemed impossible but it was really happening.

"Are you okay?" Albert asked.

"Yes. I'm fine Albert. But where are we going?"

And he started to hum. At first I didn't recognise the tune. But then it dawned on me that Albert was humming "Homeward Bound" by Paul Simon. How the hell did he know that song and where indeed were we going?
- February 22, 2018