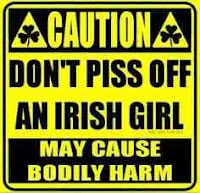 Senior blogger, Mr J.Gray of Flintshire in the principality of Wales, recently confessed to embarrassing high jinx when he was a younger man. It seems that when in drink, he developed the habit of purloining various items. He would wake up the next day and bleary-eyed focus in on his latest acquisitions which included a tea caddy, a set of silver spoons, a terracotta planter and dozens of daffodils.

This post reminded me of a time in western Ireland long ago. I was over visiting my late brother Paul. We had been out in the local villages for a "few" drinks and I had consumed far more than I was in the habit of drinking.

It was an endless night and in the early hours of the morning we finished up in a hotel in Lisdoonvarna. Paul knew the owners but in any case he seemed to know everybody in County Clare and beyond. There was music, dancing and yet more drinking.

Around 3am, Paul decided to leave - going home to Josephine who would later become his wife. I was going to get a lift back to Kilfenora with Josephine's brother Donal.

Perhaps I fell asleep in the hotel lounge - I am not sure but when I came round I noticed a framed tourism poster on the wall - advertising the delights of western Ireland. Donal was eager to leave and for some inexplicable reason, I decided that I would have that framed poster as a souvenir.

I took it down from the wall and made for the entrance but was followed into the street by the landlady and her ox of a husband. They apprehended me and angrily ushered me back into the hotel's breakfast room.

I was then subjected to a tirade of abuse from the landlady - most of it focusing on the fact that I was English. My pathetic apologies probably wound her up all the more.

There was a big table in the room which I soon found myself dancing around. The landlady had whipped herself up into a murderous frenzy and had grabbed a carving knife. I wanted to fight back - perhaps to wrestle the knife from her hands but the gorilla she had married was standing there presiding over the confrontation and I knew that with one wrong move he would be joining in with the assault.

I remember shouting, "Please don't kill me! I'll pay for the poster! I am sorry! I'm really sorry!"

The man mountain decided to intervene. He held the harridan back and took the knife from her. Then they demanded my wallet which contained my driving licence, a credit card, a blank cheque and perhaps thirty Irish punts. I was led out into the street where Donal was waiting.

We drove back to Kilfenora and mid-morning when it was light I explained to Paul what had occurred. He headed straight back to Lisdoonvarna and retrieved the wallet after giving the landlady a piece of his mind. Apparently, it was not the first time she had unleashed her crazy temper upon transgressing customers.

That night could have turned out so much worse. The idea of dancing round a breakfast table while being pursued by a wild Irish woman may seem funny but that was a sharp knife and she meant business. Thank heavens the husband was there to arbitrate and to rein her in. The moral of this story is never try to steal an Irish tourism poster from a bar in the early hours of the morning. It could go horribly wrong.
- April 25, 2018