It has been a rather weird weekend. Shirley has been at the coast with several of her many cousins. Meantime I have been at home getting better.

Thankfully, on Sunday I felt well enough to drive out of the city. I travelled east beyond the former pit village of Maltby and did some walking and picture taking. It was a lovely December day after several grey and rainy days.

On a quiet country lane, a fellow who was out walking with his family turned back specially to speak with me. He wanted to know why I was taking photographs. I told him that my hobby was legal and that some of my pictures would be submitted to the "geograph" website. He was perfectly happy with my explanation having just spotted my bulging biceps and our height differential.
I must admit that I felt a degree of sympathy for him and his family as they live in such an isolated location. Rural crime has been on the increase and the sight of a lone figure in a black Hull City manager's coat must have been slightly unnerving.

I visited nearby Stainton where the great Yorkshire fast bowler Freddie Ttueman was born. There was a massive stone cross in the churchyard - apparently it is the village's war memorial. In front of it was a grave that contained the remains of a teenage boy who was electrocuted at the nearby colliery in the 1920's.
It's always nice to visit map squares I have never entered before. I drove home feeling hungry and planned to prepare a nice rump steak with two small jacket potatoes, garden peas and fried mushrooms with onions.

After half an hour this simple culinary dream came true.

I forgot to mention than by a quiet country lane on my way to Stainton I spotted a memorial to coal miners who were lost in a methane explosion at Maltby Colliery in the 1920's. Twenty five bodies were never recovered. Followed by the names of those men, this was the inscription:- 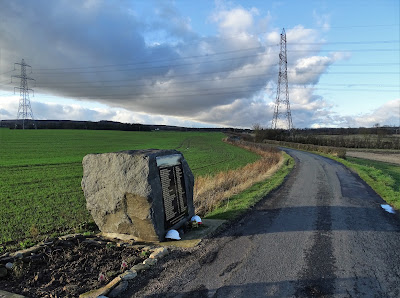