We don't always explain things to ourselves. Sometimes we operate on instinct.
I have been a regular internet user for fifteen years. I embraced the idea of the personal computer as soon as I could and looking through some old invoices, I recently discovered that back in 1996 we paid over £1600 for our "Tiny" computer package. That's a lot of money in comparison with today's computer prices and back then computer memories were small while speed of operation was frustratingly slow...So I swear I am not instinctively a technophobe. 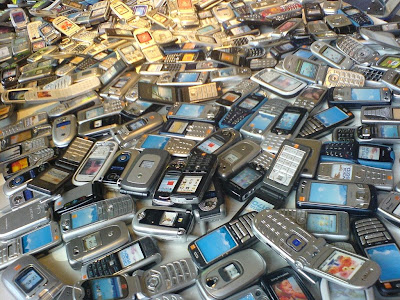 Mobile phones or what our American cousins call cellphones are a different kettle of fish. I have an antipathy towards them and I don't possess one. But what is it that turns me away from these must-have modern day accessories? Lying here on the psychiatrist's couch, various points spring to mind....

1) I hate the fact that mobile phones are tied in to the profit-hungry machinations of greedy corporations like O2, Orange, Apple or Nokia.
2) I despise the fact that people are forever changing their mobile phones. They don't seem to last very long. On a global scale this is environmentally extremely unfriendly - added to which they are often on "charge" - sucking precious electricity into their toxic cells.
3) There are ugly mobile phone masts all over the place - spoiling urban and rural environments. What gives these greedy companies the right to ram their ugly masts into the ground from Timbuktu to Toronto and from Sheffield to Shanghai?
4) I hate the idea of texting - this plague-like obsession with sending out little messages in a clipped and bastardized form of English in which accuracy and detail don't seem to matter.
5) Every day I see drivers on their mobile phones, endangering other people's lives - taxi drivers, cement truck drivers, drivers on motorways or in traffic jams. Increasingly I see people texting or checking texts as they drive.
6) As a teacher I became increasingly fed up with having to challenge children about mobile phone use in school - including lessons. There were even incidents in which teachers were deliberately riled and then caught on mobile phone cameras. Why the school allowed children to have the damned things on the premises at all I will never know.
7) Some people use mobile phones to cheat in pub quizzes.
8) When I walk on moors or dine in restaurants I do not want anybody contacting me by phone. Life is to be lived, not interrupted by banal phone calls. Sometimes you want distance and untouchability.
9) What do we really know about the health implications of mobile phone signals that invisibly buzz around our heads where ever we may be?
10) Governments are able to use mobile phones to track our whereabouts and our various communications. Is that liberty?
Okay, I realise I must sound like Victor Meldrew so in defence of mobile phones I will say that of course I appreciate they can be vital for emergency services and in allowing business travellers to oil the wheels of commerce without delay. Daughters in late night discos can also be quickly located putting minds at rest as well as aiding safety. However, I would still maintain that the mobile phone is one of the most insidious and hateful inventions of the modern world.... alongside the atomic bomb, oven chips and the Conservative Party. I won't be getting one any day soon.
- October 20, 2009