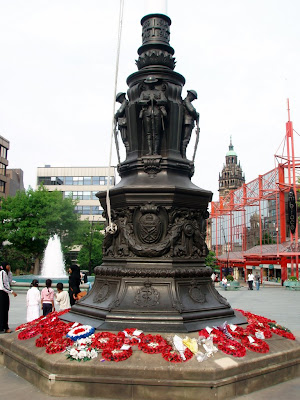 Philip Laing is a nineteen year old technology student at Sheffield Hallam University. Last weekend, he became as drunk as a Tory MP at a late night party conference shindig. His drunkenness was partly down to an organisation called Carnage UK that makes money via arranging boozy student pub crawls.
In the heart of Sheffield, between our beautiful City Hall and the John Lewis department store is a paved area known as Barker's Pool. It is dominated by the city's main war memorial with its huge flagpole. At the base of the monument there is a beautiful bronze casting of four soldiers with their heads permanently hanging down in silent respect for the fallen of two world wars. It is here where every Remembrance Sunday, the glorious dead are remembered with wreaths of poppies, prayers and private memories.
Step forward or should I say, stagger forward Philip Laing in the wee small hours. He lurches over to the memorial and urinates over last year's faded poppy wreaths. Tragically for Master Laing, this reprehensible incident is caught on camera and the resulting photograph travels to pressrooms throughout Britain and beyond. 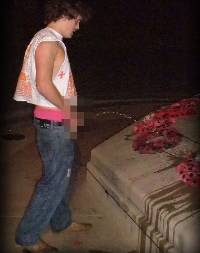 Surely, Philip Laing will never entirely live the incident down. There is every possibility that he will be chucked out of his university and next Thursday he will appear in the local magistrates court charged with urinating in a public place and outraging public decency. But shouldn't Carnage UK be there too?

In a more sober state this is what Philip said : "I am deeply ashamed of this photograph and sincerely sorry for my behaviour. I didn't realise how much alcohol I had consumed that night and I also hadn't eaten since lunchtime, which worsened the effect. I have no recollection of the events in the photograph, although I recognise this does not excuse my actions."

To some extent I must admit that I feel sorry for Philip Laing. I was a student myself and under the influence of alcohol I did a number of things that I deeply regret - some of which I have never told my family or best friends about to this day. When Philip set out that evening, I doubt that he had any intention of weeing on the war memorial and as he suggests, when he woke up he probably had no recollection whatsoever of his night-time antics that have in their turn aroused thousands of bitter words of condemnation and outrage.

We shouldn't excuse Philip's crime but it ought to be viewed in reasonable proportion. His apology sounded sincere. I would hate to think of him being booted out of university over this matter. In some ways, he is himself a victim of the boozy bacchanalian culture that is prevalent in most university cities. Philip didn't create that culture and he didn't invent Carnage UK so give the lad a break.
- October 18, 2009