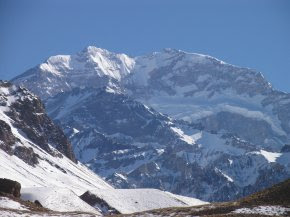 Aconcagua - The tallest mountain in the southern hemisphere. It overlooks the main pass between Chile and Argentina. 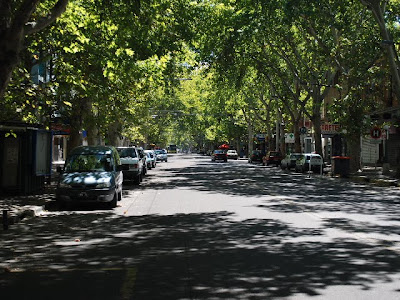 I will never forget Rapa Nui (Easter Island) - it was like a dream come true and there was so much more I might have seen. I talked to a fisherman called Tete and he told me of a volcanic vent he had found in one of the hills. He had crawled in with a torch and found evidence of ancient human habitation. If I had been staying longer, he would have taken me to see it but my air ticket said no. I had been greeted at the airport with a floral garland and left with a chain of seashells round my neck.
Today I travelled by "Andesmar" bus through the mighty Andes chain and into Argentina. It could have been five hours but it was seven because of the customary two hour hold up at the border - checking bags, papers - stamping this, stamping that. Much of the scenery was raw and enormous with snow on the peaks and condors circling. These were real, beefy, naked, soaring mountains that make the English Lake District hills look as though they were made by moles.
Mendoza seems affluent and self-confident. I arrived in sultry 32 degree heat and made my way through Saturday shoppers to the Hotel Cordon del Plata where because of overbooking they have had to put me in a suite! My jaw dropped. It is massive with a double sunken spa bath. I rarely have baths - I am a shower man but either tonight or tomorrow morning I will definitely be having a bath with jacuzzi bubbles and perhaps room service will send Mr Bond some champagne... Adios amigos!
- October 31, 2009