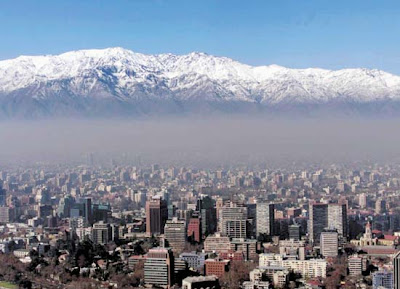 Santiago, Chile
Dear Bloggers,
Arrived here safely after a gruelling thirteen hour flight. Wasn´t too happy about the bitch of a flight attendant who chose to tell me twice not to look out of the window and keep the shade down. Bizarre! Missed Paraguay completely! But by western Argentina I had the necessary permission and marvelled at the desert like landscape and parallel ridges gliding beneath us. Then came the mighty Andes chain with contours picked out by snow. This time the bitch stopped me from taking a photograph as we were about to begin our descent into Santiago which as you can see from the accompanying picture boasts an amazing backdrop.
Here in this city of six million it feels quit subdued - not as manic as I had expected. I went to the Mercado Central and enjoyed a tasty bowl of "curato" - fish and meat soup with some local bread and a bottle of Chilean beer. Delicious after that airline crap they bring you on little trays.
Santiago is, as you might have expected, essentially European in its appearance - like a huge replica of Madrid picked up and transported to South America. I have only seen one black person - a wobbly man-lady who squeezed out of a gentlemen´s club in very tight red slacks and bounced in front of me to the next bus stop. She or he was carrying a small black and yellow handbag that looked like a retro pencil case.
That wasn´t the highlight of the day. Number one had to be my first in person sighting of "rongo rongo" script at the Merced basilica museum. What is that I hear you ask. It is indecipherable writing from Easter Island. Nobody has fathomed it. I saw it on a wooden tablet and on the carved shape of a sea snake. Such items should of course rest on Easter Island itself but there are similar pieces of archaeological Isla de Pascua booty in Washington, Paris, London and Vina del Mar by the Chilean coast.

It´s a bit chilly in Chile this evening...Time for bed.