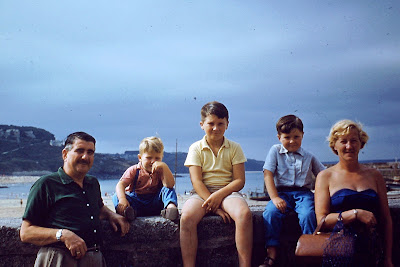 Dipping into boxes of slides and picking out just a few to scan, I come across moments from my family of which I have no recollection. The colours in the first photo are as clear as if the picture had been taken last summer. But it's 1959, somewhere in Cornwall. No doubt my oldest brother Paul was the photographer. He'd have been twelve. There's Dad who died in 1979. Brother Simon who still lives in the East Riding village where I was born. Brother Robin and yours truly at the age of six, next to Mum who died in 2007 and would have been a sprightly thirty eight in this holiday photo. Dad would have been forty five.
Below - Paul was probably the photographer again. It's 1965 and we're sitting - probably on a section of Hadrian's Wall which is not too far from Braithwaite in Cumbria where we holidayed for perhaps ten Whitsuntides in a row. I'm the one on the right - again showing off my shapely legs that, much to my chagrin, captured the lascivious imaginations of one or two previous observers. Philip was the best of fathers, with many interests and talents and during his final years, as I entered the teaching profession, my bond with him strengthened. As I grow older, I accept more readily that I am very much like him. 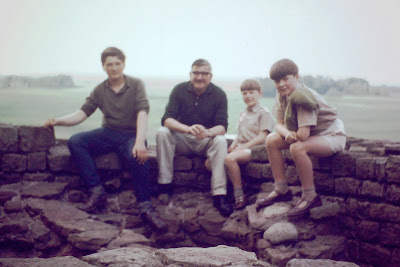 And finally, a photograph of our darling Frances with a moustachioed me on the western bank of the River Trent in the North Lincolnshire hamlet of Gunthorpe where Shirley's father was a farmer all his life. It was the summer of 1989. Frances was not yet able to walk. Since then, Shirley's parents have also left us - Charlie in 2000 and Winnie in 2008. It's funny isn't it, sometimes when you are in the midst of life you have the illusion that what you have got will last forever but of course it never does. The old die. The young grow up. Friends come and go. The calendar's pages are flipped as if windblown and before you know it all is lost. 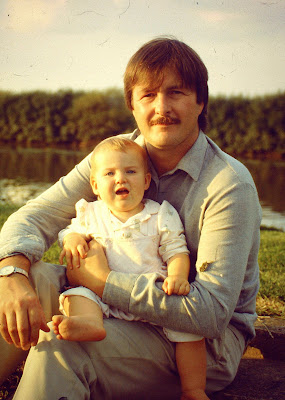