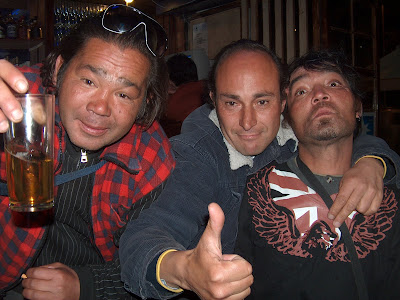 When I was in Santiago, Chile, I had a couple of days to pass before my flight out to Easter Island. Just round the corner from my cheap hotel - near to the busy Alameda that runs through the heart of the city - I found a bar. On the first evening, I sat inside it and watched a local football match on television.
On the second evening, before it got dark, I was sitting at a pavement table, reading a book with a litre bottle of "Escudo" beer for company. I looked across the Alameda to see a group of men dodging the traffic on their way across. Usually pedestrians used underpasses to avoid the hazards of the thunderous daytime traffic.
The gang of thirty-something men requisitioned a table adjacent to mine and it wasn't long before communication happened between us. They were astonished that I had come from England and delighted that I was on my way to Rapa Nui which holds a special place in the affections of many Chileans. Their English was more than imperfect but of course brilliant in comparison with my Spanish.
I noticed they were all a little unkempt as if their clothes hadn't seen washing machines in weeks and a vague odour of the stale unwashed hung about them. They looked as if they had been out in the open air too long and if entered in a personal grooming competition their scores would have been even lower than mine.
Beer flowed and night came. Communication became less fluent. They all seemed intelligent - but apparently none of them had jobs as far as I could make out. They didn't want to talk about such things. They wanted to drink beer, sing songs and talk about England, Rapa Nui, Maggie Thatcher, General Pinochet, the Colo Colo football team and the American CIA. I noticed that other, more respectable looking men in the bar were cold-shouldering the gang and even though I was becoming inebriated I felt increasingly uncomfortable with them. It crossed my mind that I could be ripe for mugging so at an opportune moment, I said my goodbyes and hurried back to the Hotel Ecuador.
They reminded me of other thirty-something Chileans I had met in a park the day before. Eyes slightly bloodshot, hair and clothes slightly dishevelled, giving out poems on little sheets of coloured paper and then begging for some financial support to help them through college. Who or what they really were I shall probably never know and the same with those crazies in the bar. 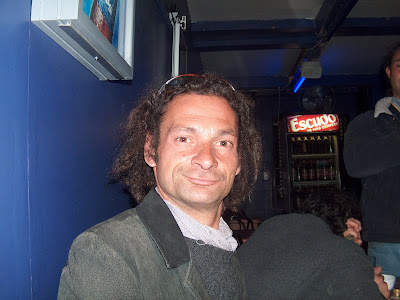