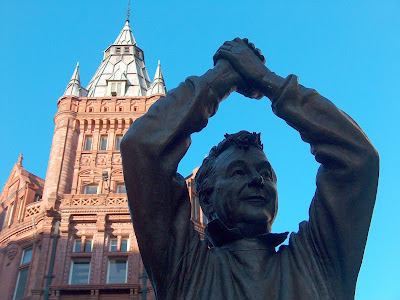 Statue of the great Brian Clough, King St, Nottingham
I don't know much about Nottingham. Until yesterday, I had only been there twice. Back in the early seventies I went to Nottingham University for an interview. I had been thinking of pursuing a degree in Philosophy but the more I looked into the subject, the more I realised it wasn't really about wisdom or meanings of life but had much more to do with academic language and clever games you can play with words. This wasn't for me. The next time I went was in the mid-eighties to see my beloved Hull City beat Notts County at their historical Meadow Lane ground.
Nottingham isn't very far from Sheffield - thirty six miles straight down the M1 but whereas we are very much in the land of "Up North", Nottingham is most definitely in "The Midlands". Though Sheffield has a population in excess of half a million, the city of Nottingham is home to only 300,000. However, Greater Nottingham, embracing satellite towns like Long Eaton and West Bridgford has an estimated population of 700,000 and so the central business/shopping area feels bigger somehow.
I decided to take an off-peak train - my return ticket only cost me £11.50. It was pleasant sitting there with my beaker of coffee, watching frosty fields flash by. On the broken wall of an abandoned industrial unit, somebody had painted "Shirley"in letters two feet high. It flashed by and then we were in Alfreton.
The main purpose of my Nottingham visit was to see our son Ian in the Victoria Shopping Centre. He has been working there for a few weeks now, managing a newly-opened men's clothing store which is an offshoot of the independent retail business he worked at in Sheffield for the past six years. He seems very positive and bubbly about the new venture even though it's taking him away from his home city. He's even looking for accommodation there now. Shirley's none too happy about that.
As well as the shop visit, I did something I have often thought of - I went to have my lunch in what is reputedly the oldest inn in England. It is called "Ye Olde Trip to Jerusalem" - perhaps in reference to The Crusades - and it nestles beneath Nottingham Castle, snug against the Castle Rock. In fact some of the rear rooms are like caves for they eat into the sandstone cliff behind the pub. A pub has stood on the present site since at least 1190AD. Are you noting that in The New World? 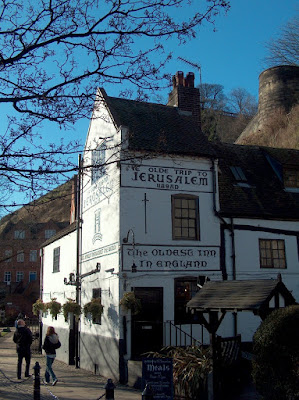 I ordered ham and eggs with chips and peas and with my pint of "Ye Olde Trip" ale, I found a small table in the labyrinth of quaint little rooms. It was only when I sat down and took out my newspaper that I realised the other occupants of the room were all women. There were four pairs and two of them clearly had their arms round each other. They were not mother and daughter either. I became aware that the other three couples were also not mothers and daughters but special friends. I had stepped into a lesbian lair! Ah well it takes all sorts and it was kind of comforting to reflect that they wouldn't be mentally undressing me and viewing me as a primitive sex object - the feelings I customarily experience in rooms filled with women! 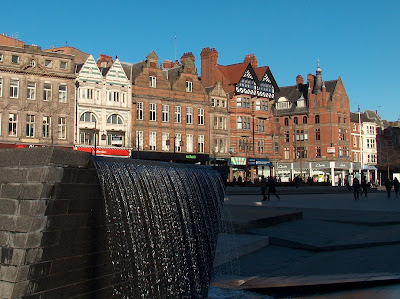