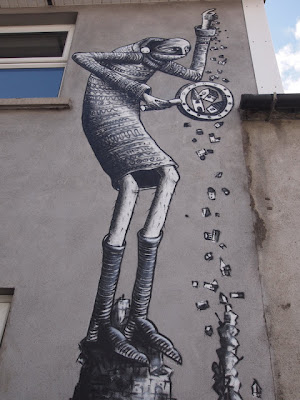 Mostly, I despise graffiti in public places and have often scoffed at the suggestion that it's a form of Art. Mostly, its quality is rubbish and it degrades urban environments. Mostly, it's done by spotty teenage boys who don't fit in - social pariahs - boys who have no artistic flair whatsoever.

Nonetheless, occasionally I see graffiti of which I approve. I rather like graffiti that has a point to make - using it as a form of protest. And sometimes I like graffiti that beautifies or adds interest to urban sites that would otherwise be neglected eyesores.

Based in Sheffield but with "works" in other parts of the country there is a clandestine graffiti artist who goes by the pseudonym "Phlegm". His work is distinctive - in shades of black and white and the themes are often fabulous with recurring images of ships and squids for example. You can link to his showcasing website here.

Yesterday, between rain showers, I nipped out to the vast Meadowhall shopping mall on the northern outskirts of Sheffield but before reaching that retail palace, I remembered to park up close to "The Riverside" public house in order to take a picture of this "work" by Phlegm:-
It's one in a series called "The harnessing of the giant squids" and it was completed in the spring of 2011. Though you can't see it in the photograph, that wall beneath the pub overlooks the River Don which is just one of the fast-flowing Pennine rivers that literally turned the wheels of Sheffield's steel industry as the eighteenth century gave way to the nineteenth. It was once a dirty, industrial sewer but today the trout have returned and regulations and new industrial processes mean the river is cleaner than it has been in donkey's years.
- July 06, 2012