Sometimes, I feel like an employee of the Peak Park Tourist Board but the national park is right on Sheffield's doorstep and since I left the thrilling world of secondary school teaching it's where I have tramped a couple of hundred miles or more. It's my main form of exercise. Some people jog, others cycle or (like Mr Brague) pump iron at the gym but me, I like nothing better than to combine three passions - map reading, photography and rambling.

On hot and hazy Thursday afternoon, I drove over to the Hope Valley, past Hathersage and Bamford until I came to the turn off to the hamlet of Aston. In places, the hedgerows threaten to overwhelm the single track lane that leads there. I managed to find a place to park near Aston Hall Farm and set off along the path to Win Hill.

Here I am looking down from Thornhill Carrs to the valley of the River Derwent with the village of Bamford nestling in the heat haze. 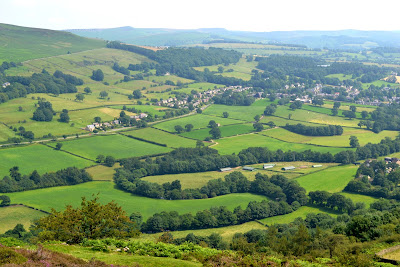 Close to Win Hill, I noticed that there's been some tree-felling at Wiseman Hey Clough Planatation overlooking Ladybower Reservoir and Ashopton Viaduct:- 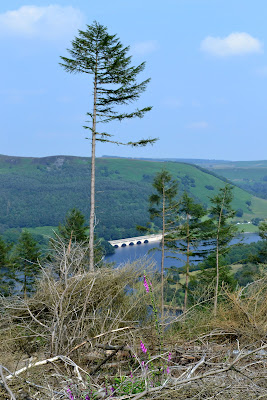 In the woods of the Woodlands Valley I found evidence of farm buildings that would have been erected long before the water board planted trees here in the 1920's and 30's. They would have been hill farmers and as I poked about the ruins I thought about those hard lives lived in days when motor vehicles and televisions were unimagined:- 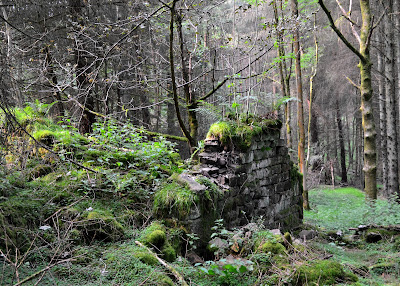 On the ridge above Woodlands Valley there is an old Roman road. No doubt the Romans created it both for military purposes and for the movement of lead which is the main reason they settled in north Derbyshire. Next to the road is a seventeenth century wayside marker known as Hope Cross but it is very likely that this was put up to replace an earlier guidepost:- 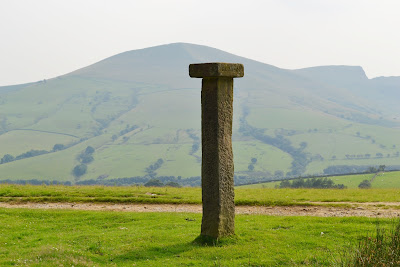 Near the village of Hope, I spotted these guinea fowl pecking about the meadow stubble and I post this picture principally for Earl Gray in Trelawnyd, Wales and Madam Blawat in Sloughhouse, California:- 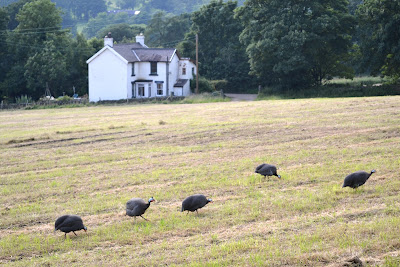 And here's a picture of the valley of the River Ashop where Ladybower Reservoir begins:- 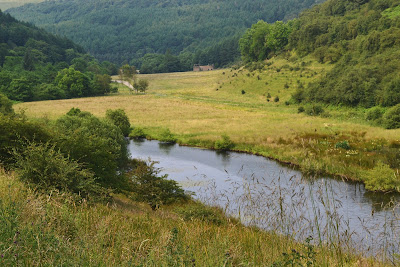