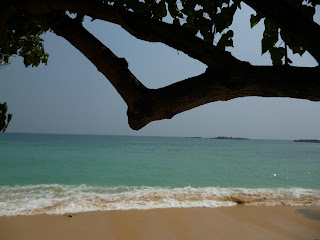 Seventy years ago my father was in Ceylon. It was during World War II and he was working for the Royal Air Force as a meteorologist. Mostly he was based in Delhi but he also got to travel around and found himself in Kandy and Colombo and panned for semi-precious stones in streams that ran by tea plantations.

And so here I am with Shirley, sweating in a little internet cafe in Unawatuna south of Galle before we toddle along to the beach for "happy hour" and more swimming in the tepid Indian Ocean. It's lovely here. Laid back and friendly even if the tuk tuk drivers and occasional charlatans have to be swatted away like flies.

We visited a tea plantation this morning and saw the whole process unfolding from picking to processing and finally we sampled about thirty teas in the factory museum. Our guide was a lovely Sinhalese man called Chris who had once managed a large section of a far bigger plantation in the interior. A downside was that our irritating tuk tuk driver kept following us around instead of patiently awaiting our return and then as we drove back to our hotel he kept trying to argue for extra money over and above our agreed price.

Finally I had to say to him, "Now you listen to me! We agreed a price and I am giving you that money with a hundred rupee tip and that is all you are getting! We have worked hard for our money and I object to being treated like some kind of cash cow. And so that's it mate. End of!" And we ambled back into the hotel...
- April 02, 2013