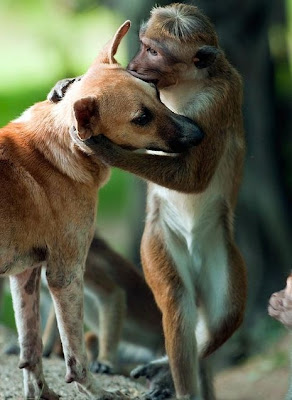 Over in Sri Lanka, the roaming dogs and monkeys aren't always fighting. Sometimes they make peace instead. Perhaps the humans who live amongst them - Sinhalese Buddhists, Hindu Tamils and Muslims could have avoided thirty years of bitterness and bloodshed if they had learnt much earlier that it is talking that ends conflict - not bullets or machetes, mobs or martial law. Yesterday a Buddhist mob burnt down a Muslim clothing warehouse in Colombo and a couple of weeks ago a similar mob protested vehemently about the sale of halal meat in Sri Lanka. If war breaks out again over the next two weeks - don't blame me or Shirley. We didn't start it.

I will try to blog again while I am over there but I am not taking my laptop so it will probably need to be from an internet cafe - assuming there are no warring monkeys or growling dogs on the premises. As they say in Italy - but not in Sri Lanka - ciao!
- March 29, 2013